The 6th Annual Nickelodeon Kids' Choice Awards were held on November 14, 1992 at Universal Studios Hollywood. Holly Robinson, Brian Austin Green and Tori Spelling hosted the show, which honored kids' favorites in movies, television, music, sports, and others from 1991. This would be the last KCA broadcast until the 1994 show, as the network didn't air a show in 1993. This was also the first show to be broadcast live, as noted by the show's hosts.

The stage of this year's show took on the appearance of a warehouse, with several crates bearing the names and logos of various Nick shows stacked onstage. Presenters would enter either by coming through a large storage unit-like door (labeled as Loading Dock #1), or by coming in through the door of the warehouse manager's office. 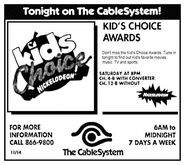