Glenn Weiss
The 12th Annual Nickelodeon Kids' Choice Awards were held on May 1, 1999 at the Pauley Pavilion in Los Angeles, California. Rosie O'Donnell returned for her third consecutive year as host.

The theme of this year's show was miniature golf, with an oversized mini-golf course onstage. The "kid winners" would sink putts into the holes to reveal the winners on flag markers. Additionally, Kenan Thompson and "Macho Man" Randy Savage competed in an "Extreme Mega Mini-Golf Championship" match throughout the show, battling across thousands of miles on their way to Pauley Pavilion for the championship round.

The telecast was preceded by the premiere of the Rugrats episodes "Wrestling Grandpa" and "Chuckie Collects", and was followed by the series premiere of SpongeBob SquarePants. 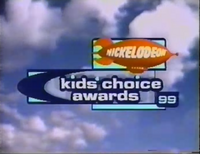