Glenn Weiss
The 13th Annual Nickelodeon Kids' Choice Awards were held on April 15, 2000 at the Hollywood Bowl in Los Angeles, California. 17,000 were in attendance at the ceremony, which was hosted by Rosie O'Donnell for the fourth year in a row. This was the last ceremony to feature the KCA Hall of Fame award, which would be awarded to Rosie herself this year.

There was no specific theme for this year's show, but the centerpiece of the stage setup was a strange entanglement of coils and wires known as the Orb. Throughout the show, the Orb would activate and light up in a flurry of lights and sparks to reveal the winners of various categories.

The telecast was followed by the premiere of the Caitlin's Way episode "Horror Show".

Will Smith - At the end of the show, Rosie told Will to "get your butt out here!" After discussing what they would do after the show, Rosie asked Will what he was going to do with the three blimps he'd won that evening. Will replied with "Uhhh... yeah, I don't know!", unwittingly causing the green slime to be dumped on him. This would be the last sliming to be triggered by someone saying "I don't know!"

David Arquette - Although not recognized as an official sliming, David dumped a bucket of slime on himself after Will got slimed, even though David never said "I don't know" or did anything to trigger a sliming. 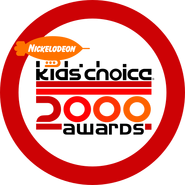