Louis J. Horvitz
The 17th Annual Nickelodeon Kids' Choice Awards were held on April 3, 2004 at the Pauley Pavilion in Los Angeles, California. The event was hosted by Mike Myers and Cameron Diaz to promote Shrek 2, and marked the first time the show was held at Pauley Pavilion since 1999. This was also the first year with Tom Kenny as the announcer, a role that he would fill until the 2013 show, before returning again for the 2021 show.

The telecast was preceded by the premiere of the SpongeBob SquarePants episodes "The Camping Episode" and "Krabby Land", and was followed by the series premiere of Danny Phantom.

The show featured a unique giveaway for the live audience in Pauley Pavilion and viewers at home. Actor Hugh Jackman offered 2 pieces of the stage to 2 lucky people, one for an audience member and one for a home viewer. Jackman gave the 1st piece, part of one of the walls of the stage with the network's logo, to a little girl in the audience, and as for the second piece, home viewers had to call in on their phone and give out their address, and by the end of the show, Jackman gave the 2nd piece to the winning caller. In the end, Jake from Alan Town, Pennsylvania won one of the KCA podiums onstage, with the podium being wrapped up in bubble wrap and taken off of the stage for shipping. 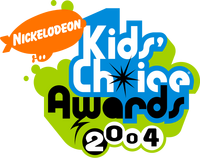