Glenn Weiss
The 31st Annual Nickelodeon Kids' Choice Awards were held on March 24, 2018 at the Forum in Inglewood, California. John Cena returned as host of the ceremony for the second consecutive year.

The 2018 show was unique in that it took place on the same day as the nationwide "March For Our Lives" event, where kids all over the country marched and protested against school shootings and gun violence. The march was continuously mentioned and cited throughout the show, as many of the attending celebrities were fresh out of the rallies in the Los Angeles area. Cena gave a special shoutout congratulating the attendees of the march, stating that they truly embodied the spirit of Nickelodeon and Kids' Choice.

The telecast was preceded by the premiere of the Henry Danger episode "Back to the Danger, Part 1", and was followed by the Knight Squad episode "Tonight, Two Knight".

Nintendo's mascot Mario once again appeared, setting up a speedrun to collect Power Moons scattered all over the Forum. Barbie also appeared during a special performance, expressing how amazing the performance is and how excited she is to be apart of the show. Then she, along with Laurie Hernandez got slimed, with Barbie saying "#SlimeGoals".

Since this was John's second year hosting, he brought his whole family with him. The Cenas, which are comprised of Mom Cena, Don Cena, Ron Cena, Joan Cena, Sean Cena, and Nana Cena, came to give John a helping hand when he hosted the KCAs. A bunch of crazy antics ensued, such as Nana Cena messing around with Camera 3 during the show and mistaking John's booger for a drop of slime. 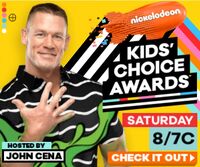