Nickelodeon
Register
Don't have an account?
Sign In
Advertisement
in: Cleanup, Shows, films, and people with wikis, Stubs,
and 5 more

ALVINNN!!! and the Chipmunks

The topic of this page has a wiki of its own: Munkapedia.

ALVINNN!!! and the Chipmunks

Alvin and the Chipmunks by Ross Bagdasarian Sr. 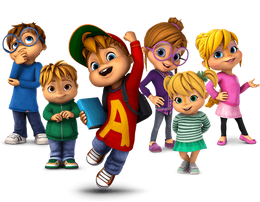 ALVINNN!!! and the Chipmunks is a French-American CGI animated series produced by Technicolor Animation in France and Bagdasarian Productions in the US. It premiered on M6 (France) on March 30, 2015. This series is the fourth incarnation of the Alvin and the Chipmunks characters. Nickelodeon acquired the rights to the first two seasons in 2014,[1] and first aired the show in the US on August 3, 2015.

The series was created by Janice Karman, takes us on a roller coaster ride of music, laughter and stories geared to entertain The Chipmunks' four generations of fans. Presented for the first time in glorious CGI, the series features ground-breaking animation and a new, original Chipmunk song in every episode. The series is an animated version of a prime-time sitcom and reflects the trials and tribulations of a single parent, David Seville, trying to raise six hyper-active Chipmunks. Like most parents, Dave's patience will be pushed to the limit, forcing him to end most sentences in "ALVINNN!!!"