Nickelodeon
Register
Don't have an account?
Sign In
Advertisement
in: Shows with wikis, Nicktoons, Cancelled shows,
and 4 more
English

"All Grown Up with You!" (performed by Cree Summer)

All Grown Up! is a sequel series to Rugrats, produced by Klasky Csupo.

The series revolves around the lives of the Rugrats, ten years after the events of the original series. It premiered on April 12, 2003 (just a day after Jimmy Neutron's Nicktoon Blast opened at Universal Studios Florida) as a preview before starting its regular run in late November (although in October, it began its regular run on YTV in Canada).

The show is based on "All Growed Up", the 10th anniversary special episode from Rugrats' seventh season (aired in 2001), which proved popular enough that Nickelodeon decided to commission a whole series. Production began in September 2002. The principal characters and their traits (as well as their voice performers) were carried over from the original Rugrats, with a handful of changes and additions.

→ Main article: All Grown Up! videography

Paramount Home Video released seven VHS tapes and DVDs of All Grown Up! between 2003 and 2005. Each tape contained either two regular episodes or an hour-length special episode, with the adjacent DVDs also including two more episodes (with the exception of the first DVD, Growing Up Changes Everything, which instead included the above-mentioned "All Growed Up" special and another episode from Rugrats' seventh season, "My Fair Babies", both of which had been previously released on a separate VHS). The first four Nick Picks compilation DVDs also each included an episode of All Grown Up!, though they were all episodes that were already available on the show's own DVDs; however, the Nick Picks Holiday DVD includes the show's Christmas episode, "The Finster Who Stole Christmas", which was not released on any other DVD in the US.

The entire five-season run of the show was released on DVD in Australia. Currently, no word has been given on a full DVD release in the US.

All Grown Up! received mixed reviews from fans of the original series. While they were happy to see the Rugrats characters return, they felt that it was too bland and generic and lacked the charm, creativity and feel of the original series, which had a very unique premise. It was also criticized for rewriting the characters' personalities and having many continuity problems and retconning. However, the show does have a cult following.

When the series premiered its regular run, more than 3.2 million viewers, and over a third of all kids watching cable in the United States, tuned in, enough to put it into the 2nd place slot for the week, behind an NFL game on ESPN, and making it the highest-rated premiere in Nick's history (the sneak peek episode that aired in April, "Coup DeVille", didn't make the top 15 cable programs for that week, due to the ongoing war in Iraq). 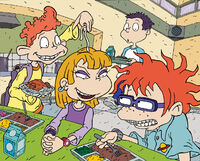 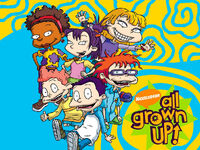 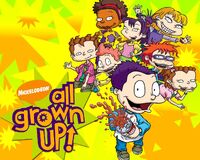 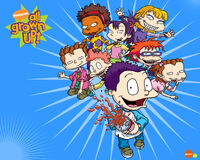 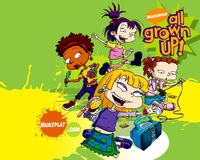 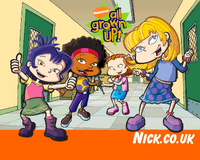 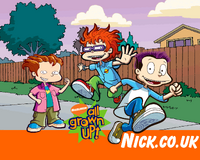 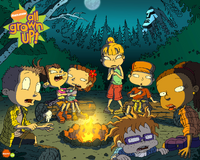 Interview with Cree Summer, the voice actress for Susie Carmichael.

2003 print ad for the series premiere 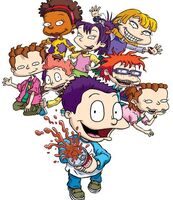 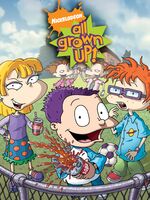 This show has a wiki of its own: All Grown Up! Wiki.