Nickelodeon
Register
Don't have an account?
Sign In
Advertisement
in: Shows with wikis, SNICK shows, Live-action shows,
and 7 more

"Fresh out the box,
Stop, look and watch,
Ready yet, get set,
It's Alllllll That!"

All That is a sketch comedy variety show that aired on Nickelodeon featuring short comedic sketches and weekly musical guests. The theme song for All That was performed by TLC, who performed as the musical guest in two of the first three episodes. Early episodes were taped at the now-defunct Nickelodeon Studios at Universal Orlando, but then moved to Hollywood (California) at the Nickelodeon on Sunset theater (formerly the Aquarius Theatre).

All That first aired on April 16, 1994 as a special preview and debuted as a regular series on December 24th of the same year. It was successfully broadcast internationally in countries such as the United Kingdom, Australia, and Canada.

All That lasted 10 seasons before it was finished in 2005. The last episode aired on October 22, 2005 on the Nickelodeon network. The show started out in the SNICK block until 2004, when the network converted the SNICK timeslot into a second night for TEENick. In fact, the second era cast members would host SNICK as the "On Air Dare" would be played between shows during commercial breaks.

Reruns of the original series currently play on Nick on Pluto TV during 5:30-7 PM EST. 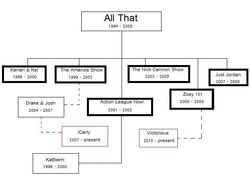 All That was also the starting point of other shows on Nick. The Amanda Show led to Drake & Josh, starring Drake Bell, Josh Peck, and Nancy Sullivan. The show also starred Miranda Cosgrove, who would go on to star in iCarly, which premiered soon after the end of the regular Drake and Josh series. In another branch, Zoey 101, the show Jamie Lynn Spears left All That in order to start production, welcomed Victoria Justice to the cast at the start of season two. After the series wrapped production, Justice was pitched her own show Victorious, which premiered in 2010. Jennette McCurdy and Ariana Grande later got to do another spin-off show in 2013, titled Sam & Cat.

In the 10th season, with new cast members Kianna and Denzel, it showed the cast getting out of a Black Limousine, and walking down the red carpet, and talking to their fans and at the ending it showed the cast in front of the show's logo with cameras flashing. It resembles the seasons four and five intros.

→ Main article: All That: The Album 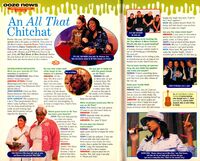 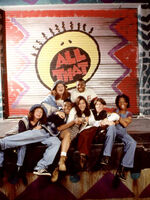