All That was an American live-action, sketch comedy-variety show that aired on the Nickelodeon cable television network featuring short comedic sketches and weekly musical guests. The theme song for All That was performed by TLC, who performed as the musical guest in two of the first three episodes. Early episodes were taped at the now-defunct Nickelodeon Studios at Universal Orlando, but then moved to Hollywood (California) at the Nickelodeon on Sunset theater (formerly the Aquarius Theatre).

All That first aired on April 16, 1994 as a special preview and debuted as a regular series on December 24, 1994. It was successfully broadcast internationally in countries such as the United Kingdom, Australia, and Canada.

All That lasted 10 seasons before it was canceled in 2005. The last episode aired on October 22, 2005 on the Nickelodeon network. The show started out in the SNICK block until 2004, when the network converted the SNICK timeslot into a second night for TEENick. In fact, the second era castmembers would host SNICK as the "On Air Dare" would be played between shows during commercial breaks.

This Includes Cast Members Such As Josh Server and others.

During Season 1, Heath Seifert and Kevin Kopelow were brought on as producers and continued working in that capacity through Season 3. The writing team advanced to Executive Producers/Head Writers for Seasons 4-6. Heath and Kevin continued their relationship with Kenan and Kel by Co-Executive Producing/Head Writing Kenan & Kel and eventually writing the feature film Good Burger 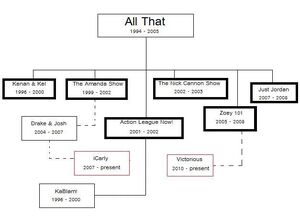 All That was also the starting point of other shows on Nick. The Amanda Show led to Drake & Josh, starring Drake Bell, Josh Peck, and Nancy Sullivan. The show also starred Miranda Cosgrove, who would go on to star in iCarly, which premiered soon after the end of the regular Drake and Josh series. In another branch, Zoey 101, the show Jamie Lynn Spears left All That in order to start production, welcomed Victoria Justice to the cast at the start of season two. After the series wrapped production, Justice was pitched her own show Victorious, which premiered in 2010.

The Greenroom in Season 1 was located on the set, which was mainly black with set equipment and a stairway to the backstage halls. Which sometimes they're seen in, too. Season 2's Greenroom was a hangout place for the cast members in which are pop culture props.

Seasons 3-6's Greenroom was the same when the show moved to Hollywood. Inside was the Logo painted on the left wall, and couches, tables, chairs, and other pop culture props were seen, even 2 arcade video game machines. It also contains an ON-AIR light board above the door, where the cast leaves to go so the show, which they walk up a short staircase and hand rails. There is also an additional door on the right, were some cast members also appear in the green room.

In the 10th season, with new cast members Kianna and Denzel, it showed the cast getting out of a Black Limousine, and walking down the red carpet, and talking to their fans and at the ending it showed the cast in front of the show's logo with cameras flashing.

On November 26, 1996, Nickelodeon has released All That on CD, titled: "All That: The Album". It contains All That Dialogues from the show, and songs sang from Musical Guest (i.e. Faith Evans, Coolio, Monica, Naughty By Nature, etc.). All That's theme opening and outro theme were finally released on this CD. Music from the CD is mainly inspired from the show, related to Drake & Josh: Songs from and inspired by the hit TV show and iCarly: Music From and Inspired by the Hit TV Show.[2]

On October 1, 1998, Nickelodeon released a 112 page book of All That called, "All That: Fresh Out The Box" by Steve Holland. The book contains information of the show's sketches, cast members, and notable points of the show. It also contains different character information as well. Bonus features include: An episode guide complete with quotes, the Playlist – the hottest musical acts, the coolest grooves, special Guest Stars, behind the scenes of All That, and an Ultimate All That Trivia Contest.[3]

Retrieved from "https://nickelodeon.fandom.com/wiki/All_That?oldid=71648"
Community content is available under CC-BY-SA unless otherwise noted.