Nickelodeon
Register
Don't have an account?
Sign In
Advertisement
in: Stubs, Live-action shows on Nick Jr., Cancelled shows,
and 4 more

Allegra's Window was a Nick Jr. television series from October 24, 1994 to December 8, 1996, with reruns continuing to air on the main Nickelodeon network through January 29, 1999, and later airing on Noggin from February 2, 1999 to April 2003. The show featured child actor Tessa Ludwick and deals with the daily life of a precocious, imaginative puppet named Allegra, in a similar style to Sesame Street.

The series follows Allegra through the daily triumphs, trials, and tribulations of being a little girl. She and her big brother Rondo, along with her best friend Lindi (a yellow dog), a pesky blue neighborhood cat named Riff and a green boy named Poco all try to learn about the world around them with the help of their neighborhood friends. At the end of each episode, Allegra sits at her window and reflects on all the lessons she has learned. The series was music-based and included musically inspired characters named Lindi, Rondo, Riff, Poco, Reed, Miss Melody, Ellington, Encora, Sonata, Clef, Woofer, Aria, Tweeter, Flugie, Vi, and of course, Allegra the title character's name herself. There were also segments that feature talking musical instruments that live on the wall of Reed's Music shop. Special character Daphne Dolphin also appears with her friend Salvatore Intieri later in the series.

Over 100 original songs were created for the series, under the oversight of musical director Don Sebesky.

The original decision to use the name Allegra for the show's lead occurred after creator/executive producer Jan Fleming attended a dinner party at the house of London-based academics and was introduced to their youngest daughter, Allegra. That evening, she remarked that it would be a great name for the little girl at the center of the project she was working on. 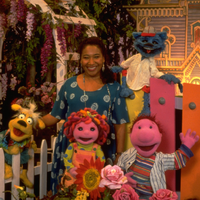 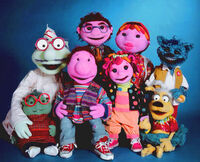 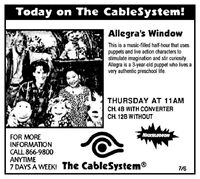