Nickelodeon
Register
Don't have an account?
Sign In
Advertisement
in: Infobox templates, All That cast members, Females,
and 11 more

Paul Michael (2019–present)
Amanda Laura Bynes (April 3, 1986) is an American former actress, singer, and fashion designer. Bynes appeared in several successful television series, such as All That and The Amanda Show, on Nickelodeon in the mid to late 1990s and early 2000s, and in 2002, she starred in the TV series, What I Like About You. She transitioned to a film career. Her first film break came in 2002 where she starred alongside other child star Frankie Muniz in the comedy Big Fat Liar before starring in several other films aimed at teenage audiences, including What a Girl Wants, Love Wrecked, She's the Man, Hairspray, and Easy A.

She appeared on All That from its third season replacing Angelique Bates until the sixth season, from 1996 to 2000. She was the host and star of The Amanda Show from 1999 to 2002. Because of her Nickelodeon roles in the mid-to-late 1990s, she was also a recurring panelist on the game show Figure It Out, which aired during that time, appearing in 52 episodes. She also appeared in a 1998 episode of Blue's Clues wishing Blue a Happy Birthday along with Michelle Trachtenberg. Later, from 2001-2002, she had a recurring voice role as Taffy on Rugrats, who was hired as the babysitter for the main characters.

The All That character Dr. Bynes, played by Josh Server, is named after her father, Rick Bynes, who is indeed a dentist. Among her most notable characters on All That were the advice-giving Ashley. On The Amanda Show, she played Melody, Cynthia Worthington, Lula Mae, Amber, and Penelope Taynt. 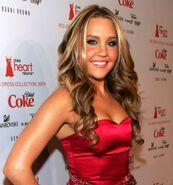 Amanda in the sketch Ask Ashley 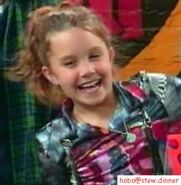 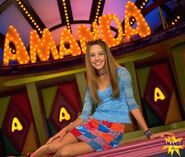 Amanda Bynes as a new cast member of All That interviewed in Nickelodeon Magazine, March 1997

Amanda Bynes on the Orange Carpet for the Kids Choice Awards at the Grand Olympic Auditorium in Los Angeles on April 19, 1997

Bynes and Nick Cannon interview each other in Nickelodeon Magazine May 2001.