Nickelodeon
Register
Don't have an account?
Sign In
Advertisement
in: Villains, Evil Geniuses, Bunsen Is a Beast characters,
and 12 more

Bunsen Is a Beast!

Beauty or the Beast

"Sugar snaps!"
Amanda Killman is the main antagonist of the Nicktoon Bunsen Is a Beast. She is Bunsen's nemesis. Her main and number one henchman is Beverly. She was voiced by Kari Wahlgren.

Amanda Killman is a thin girl with a pale skin tone. She has blonde hair tied into two little pigtails held by blue bands. She wears a dark blue bow and has freckles. She has dental braces and a slight lisp. She wears a school-girl like uniform with a white T-shirt, red vest, striped blue skirt, light blue socks, and black Mary Jane shoes.

Amanda Killman is the mean girl of the class, and is somewhat of an airhead. She is also a power-hungry, evil, and cruel dictator. She incredibly hates beasts (particularly Bunsen, the physical opposite of everything that she is), and will stop at nothing to have them banned from human society. She can also be arrogant and easily distracted when she believes she has the upper hand.

Despite her reputation, however, Amanda is exceedingly immature, prone to throwing temper tantrums and irrational thinking, acting more as a cranky teenager rather than an evil genius. It is also because of this that right after she accomplishes such feats it is her own ego and overconfidence that quickly causes her to lose in a situation with one like Bunsen, robbing her of intimidation and her dignity. Even most of her plans are somewhat frivolous or out of spontaneous desire. 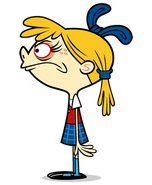