Angelica Pickles
Rugrats and All Grown Up! character

"Yucky" (Dil's nickname for her)

Angelica Charlotte Pickles is the main antagonist of Rugrats, and one of the main characters in the spin-offs All Grown Up! and Rugrats Pre-School Daze. Voiced by Cheryl Chase, she is a bossy and spoiled brat who is Tommy and Dil Pickles' adorable and very beautiful cousin.

As a toddler, Angelica's blonde hair was put into a pair of pigtails each punctuated with a large purple bow. Her outfit consisted of a red-and-black-striped shirt with flared cuffs, a purple dress, blue tights with green dots, red socks, and purple sneakers. In some early episodes she also wore diapers over her blue tights. She is an only child and as a result, she has become a very spoiled child whose parents pander to her every need and give her anything she wants without cease. Her parents, Drew and Charlotte, are hardly ever around because of their jobs, which in turn may mean that her parents are neglectful; they also rarely punish or discipline her. Being spoiled could also come from her parents' vast wealth, which is used to buy her toys and very expensive birthday parties. Despite her cuteness and beauty, she whines and cries to get what she wants, and has a rather whiny voice.

Until Susie Carmichael came along, Angelica was unique among the regular children in that she could properly talk to grown-ups, and as such, she acted nicely towards the adults, and was notoriously mean to the other little babies, specially by lying and influencing their view of the world. When Susie did come along, Angelica soon became a rival to Susie, and often competed in many things. In fact, almost every time Susie is in an episode, Angelica is also in it, although perhaps ironically, Susie's introduction episode did not feature Angelica.

Angelica is two-and-a-half years old at the beginning of the series. In "Angelica's Birthday", she turns three years old.

Despite acting mean to the little babies most of the time, it is revealed in the episode "Moving Away" that she was the reason Tommy, Chuckie, Phil and Lil befriended each other and, even more, that Angelica considered the other babies her best friends.

Angelica's parents, especially her mother, seem to also be spoiled. In Rugrats, Charlotte was Angelica's role model in some ways. Charlotte is a powerful member of a major corporation. In a realistic dream sequence, she said that the only thing she liked better than corporate domination was corporate domination with her special girl. For Angelica's thirteenth birthday party, she hired an ice sculptor to sculpt Angelica out of the iceberg that sank the Titanic. She even suggested adding Angelica's face to Mount Rushmore for her sixteenth birthday. Drew is a little more responsible and reasonable with his daughter. He is often the one who worries about Angelica becoming too spoiled, but when he discusses this with Charlotte, she usually disagrees.

She has a cat named Fluffy, which she often pampered. She was often seen with a doll named Cynthia, which she apparently considered her most prized possession.

When the series started, she, Tommy and Chuckie were their respective parents' only children. However, by the end of the series, Angelica was the only "only child" remaining, as Tommy gained a brother, Dil, through birth and Chuckie gained a sister, Kimi, through marriage.

Although she has grown up, Angelica continues to be mean and spoiled, however, not as much as she used to be. Her parents are still quite wealthy as well. Since turning 13, she has been doing many stereotypical "teen things" like getting a cell phone, pursuing boys, and getting the latest trends in fashion. Also, she still constantly rivals Susie, mostly at singing. At 13, she looks more mature and more beautiful.

One of Angelica's most important storylines was when she turned 13 in "Lucky 13", and had many things to deal with: an obligation to invite the other kids to her birthday party, and a popular teenager, Savannah, organizing a spring bash to lure away any other potential party-goers. Savannah has since warmed up to Angelica, even letting her sit at the "popular" table at the cafeteria.

She and Susie have also become good friends, with Susie giving Angelica advice or help, despite the fact that Angelica tries to weasel Susie out of opportunities, like singing on stage. However, Angelica has softened up to others, frequently giving help or acting kind, and she and Susie still consider each other as rivals, albeit mildly. 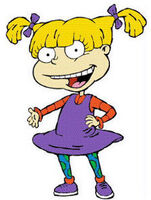 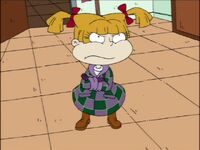 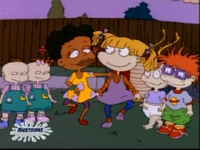 Angelica in "live" form, as seen at the Universal Studios Theme Parks. 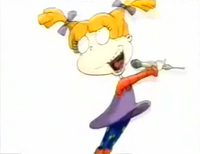 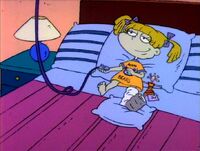 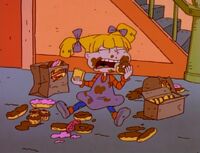 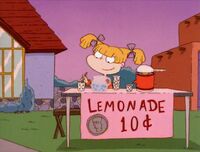 Angelica does not like having to be babysat by Team Rocket. 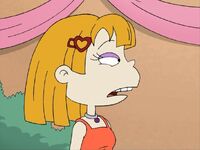 Angelica as she appears in the first season of All Grown Up! 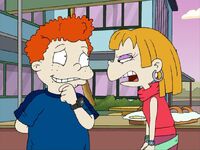 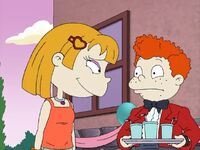 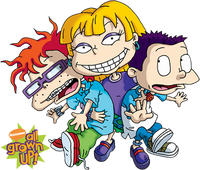 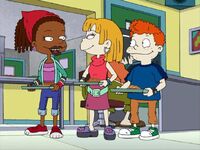 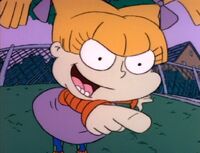 Retrieved from "https://nickelodeon.fandom.com/wiki/Angelica_Pickles?oldid=118062"
Community content is available under CC-BY-SA unless otherwise noted.