Angus, Thongs and Perfect Snogging is the 20th film released by Nickelodeon Movies. It is a 2008 British film co-written and directed by Gurinder Chadha. The film is based on two teenage novels by Louise Rennison: Angus, Thongs and Full-Frontal Snogging and It's OK, I'm Wearing Really Big Knickers or, as it was sold as in the U.S., On the Bright Side, I'm Now the Girlfriend of a Sex God.

The movie is a coming-of-age story following fourteen-year-old Georgia Nicolson, played by Georgia Groome, as she tries to get a boyfriend and throw the greatest fifteenth birthday party ever, all while trying to keep her parents (Alan Davies and Karen Taylor) happy.

On the first day of the school year, 14 year-old Georgia, and her friends, Jas (Eleanor Tomlinson), Ellen (Manjeeven Grewal) and Rosie (Georgia Henshaw) spot two new students that have just moved to Eastbourne from London. They are brothers--fraternal twins Robbie (Aaron Johnson) and Tom (Sean Bourke). The girls follow the boys, who are exploring Eastbourne with their friend Dave "the Laugh" (Tommy Bastow).

After covert surveillance, Jas and Georgia meet Tom and Robbie in the organic food store their family owns. At the store, Jas and Tom quickly bond. Georgia, love-struck and shy, has an awkward conversation with Robbie, her mother's appearance causing further embarrassment. The girls buy a few items and walk home. On the way they discover that Robbie is seeing Georgia's rival, Lindsay. Enlisting the help of her friends, and the girls do some 'peeping' to discover Lindsay both wears a thong and enhances her bosom using "jelly" inserts in her bra.

Georgia hatches a plan to get closer to Robbie, by pretending that her cat, Angus, has gone missing, gaining Robbie's sympathy and attention. Jas actually has Angus on a leash in another part of town, but he escapes while she is watching Tom, and Robbie does end up recovering Angus. After the successful rescue, Tom asks Jas out on a date.

As a subplot, Georgia's father has been offered a promotion, which would require the family to move to New Zealand. He leaves to prepare for the family to emigrate. Before his departure, Georgia's parents fight about the time spent apart. During his absence, Georgia's mum hires an attractive builder called Jem to re-do the living room, and begins to spend increasingly periods of time with him. Georgia becomes the unofficial head of the house by doing a vast majority of the cooking, and looking after of her sister Libby, a child who often displays 'cat like' behavior throughout the film.

Jas's new relationship causes friction in the group of friend, especially with Georgia who feels that Jas has 'abandoned' the Ace Gang for Tom. During gym class, they discover that Jas, too, has started wearing thong underwear. Georgia confronts Jas about her changed attitudes, and Jas responds by telling them she's just 'working undercover to spy on the enemy.' Later she tells them that she's gotten them all invited to an exclusive party.

The Ace Gang goes to a local boy's house named Peter Dyer, who educates young girls on about how to snog. Peter had earlier given a 'lesson' to Georgia, and developed a severe crush for her. He confronts her at the party, taking her outside, expresses that she's his best student, whereupon he grabs her tries to kiss her. Georgia, in an attempt to deflect Peter, falls backwards into bushes, and her skirt ends up around her waist. At that same time, Robbie, Lindsay, Jas and Tom arrive to see this. Robbie, upset, at what looks like a passionate relationship between Georgia and Peter goes inside, while Lindsay rudely comments on Georgia's underwear. Jas looks apologetically at Georgia as she tries her best to recover with dignity.

Later, Tom invites Jas to go swimming with him and Robbie. In the previous scene, Georgia expressed her humiliation of the events at the party the other night. Jas explains that she will be going to the pool, and tells Georgia that this will be a perfect opportunity for Georgia to explain the events to Robbie herself.

Georgia meets them at the pool, and due to babysitting duties, is accompanied by her sister. Georgia then shows to Jas her badly fake tanned legs, which have gone a strong shade of orange due to misapplication. They then reemerge, Georgia explains to Robbie that she's not dating Peter, and that it was all a big misunderstanding, which pleases Robbie. During their time in the pool, Georgia's badly tanned legs are revealed, Although embarrassed, Robbie successfully reassures Georgia. The two kiss, however Robbie awkwardly pulls away from her, then leaves, after saying he has to "sort some things out."

Georgia during a discussion with Jas about the events, she is reassured in Robbie's interest with her, due to similar behavior before Jas and Tom began their relationship. Later in the day Peter comes to Georgia's house, who is pursuing her. Georgia rejects his advances, and as an explanation of her lack of interest, lies and tells him she is a lesbian.

The next day at, rumors that Georgia is a lesbian have spread, with Dave 'The Laugh' passing Georgia a note, inquiring as to her sexuality. Georgia tells him she isn't a lesbian, Dave commenting that Robbie said that she wasn't. The mention of Robbie pleases Georgia, who is then dismayed when she realizes that Robbie has not invited her to a 'gig' in Brighton that 'Stiff Dylan' Robbie and Dave's band, is playing at. Georgia ends up asking Dave to the gig, after reading Men Are from Mars, Women Are from Venus, which her mother had given to her to attempt to explain the differences between men and women. Georgia hopes to make Robbie realize his feelings for her by inducing a little jealousy. Robbie tries to talk to Georgia at the gig, but is stopped by Lindsay, who tells him that she is holding a party. Dave walks Georgia home, and Dave confesses to Georgia that he really likes her. He tries to kiss her, but Georgia makes him give her a handshake instead. He then respectfully kisses her on the cheek, and says "see you around, beautiful" which upsets Georgia.

The next day at school, Dave won't talk to Georgia, hurt, he's found out that she was only using him to make Robbie jealous, calling Georgia a "heartless user". Dave tells Robbie what Georgia was doing him, and he stops talking to her as well, due to the fact that he and Dave are friends. Georgia soon finds out during gym class that it was Jas that leaked this information, and they have an argument, which quickly turns physical (while playing sports, Georgia roughly tackles Jas) and they vow never to speak to each other again.

Georgia decides, and that it is best for everyone if she emigrates to New Zealand, a plan she had originally been hostile to, due to her lack of friends and romantic interests. She makes major changes in her life, including taking better care of the house due to her mother's frequent absences, cooking and looking after Libby, throwing out her teen magazines, listening to dolphins, and doing meditative yoga for relaxation purposes. She even dyes a streak of her hair a shocking blonde.

Georgia goes to the beach, knowing Robbie would be there and apologizes to him. Robbie tells her that he ended the relationship with Lindsay Robbie tells Georgia that he wrote a song about her (Georgia) called "Bitch in a Uniform" and that he wrote it when he was pissed off at her, but that he still likes her and can't stop thinking about her. She tells him she's leaving for New Zealand, dejecting him. They stand up and he offers her his hand, and Georgia thinks that he is merely calling a truce. They are about to kiss for the second time, but as Robbie brushes her hair, he discovers her blonde streak, which causes a distraction.

On her fifteenth birthday night, Georgia's mum takes Georgia to a club to celebrate, it turns out to be a big surprise party, which Jas had secretly organized with Georgia's mum. She is greeted by all her friends and her family, with Jas and Georgia befriending each other again. Georgia's mother tells her that she must also thank Jem for the party as well, who is revealed to have a boyfriend who joins the club, dissuading Georgia fears of infidelity. Georgia's father has also returned from New Zealand as a surprise. The family decide to stay in Eastbourne.

The Stiff Dylans are performing the song "Ultraviolet" which Robbie had written about Georgia. During the song, Georgia introduces Ellen (the last single member of the Ace Gang) to Dave, who is still sad about Georgia. They are immediately attracted to one another, and end up sharing a kiss. Georgia also introduces an unnamed girl to Peter, and we then see them dancing happily together.

The Stiff Dylan's are interrupted mid-song by an angry Lindsay, who had come from her own party (which only two friends had attended), calling Georgia several rude names, and herself perfect, and declares that it's perfectly obvious which one Robbie should choose. Robbie takes Georgia's hand and pulls her on-stage, tells Lindsay that Georgia is the one he wants, and that she's perfect for him. Jas, and the other members of the Ace Gang join them on-stage, and Jas then pulls Lindsay's "jellies" out of her bra, displaying her fake nature.Lindsay, shamed, disappears off stage. Robbie apologizes for Lindsay trying to ruin her party, and Georgia coyly asks Robbie if he really thinks she's perfect. Robbie replies, "I thinks you're "mad" -- you're perfect for me." They hug and finally kiss on the stage.

The movie ends with a scene at Georgia's breakfast table with her, her parents, Libby, and Angus seated, talking and eating. In narration, Georgia relates to us that she is now very happy with her life: she doesn't mind her parents enthusiastically snogging in front of her anymore, that she has great understanding friends, and that she doesn't mind not looking perfect -- it's overrated. As she leaves the house to go to school, we see Robbie waiting for her. They clasp hands, and as they step off to school, the scene changes to them on a date, simply walking along the boardwalk on a warm evening, enjoying each other.

The film garnered positive reviews, receiving 72% on Rotten Tomatoes.[1] Critics noted the strong central performance of Georgia Groome, who was praised for her "super-engaging"[2] and "endearingly natural" performance.[3]

The film has earned £9,328,656 which includes £6.6 million from the UK alone.[4] The film was in the top 40 in the UK and Ireland and Malta 2008 box office.[5] The film was originally going to be released theatrically in the United States, but instead it later was released direct-to-DVD. 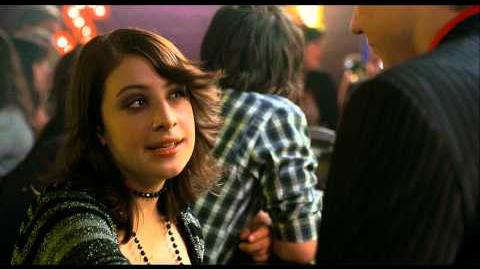 U.S. DVD cover
Add a photo to this gallery

Retrieved from "https://nickelodeon.fandom.com/wiki/Angus,_Thongs_and_Perfect_Snogging?oldid=232194"
Community content is available under CC-BY-SA unless otherwise noted.