Ansi Molina is the main protagonist on Welcome to the Wayne. He is the son of Albert Molina and The Wayne's most recent resident. Where he meets his best friend Olly Timbers and Saraline Timbersthen becomes the newest member of Team Timbers.

Before moving to the Wayne, Ansi was reserved and didn't seem too keen on making friends with other kids due to moving around so often. Like many introverts, he finds libraries a safe place where he can enjoy himself and relax. As the series progresses, Ansi is shown to come out of his shell more. His interactions with Olly slowly breaking down his refusal for close contact and the intensity of his germaphobia.

In general, Ansi is an insecure, reserved and a rather neurotic child. He doesn't enjoy physical contact and is shown to occasionally douse his hands in hand sanitizer after touching something that could be contaminated. Ansi is also demonstrated to be a perfectionist, he owns LEGO esque building blocks called "Gleeco", and each model he owns are supposed to look "just like on the box". He is a self-described hypochondriac and referred to by Olly as "obsessive compulsively precise".

Despite his orderliness, he has an adventurous spirit deep down, and enjoys risktaking, albeit to an extent and can be cowardly in frightening situations. Ansi also mentions that he takes classes for kendo; a modern Japanese martial art in swordsmanship. He's presumably a very experienced student as he claims that his kendo class is "very low level". Being able to defend himself well enough and with his friends by his side, Ansi truly enjoys going on missions. 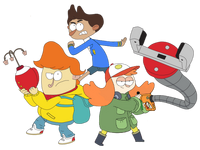 Retrieved from "https://nickelodeon.fandom.com/wiki/Ansi_Molina?oldid=250899"
Community content is available under CC-BY-SA unless otherwise noted.