Nickelodeon
Register
Don't have an account?
Sign In
Advertisement
in: The Fairly OddParents characters, Characters, Males,
and 11 more

"I’m not an idiot in any manner whatsoever!"
Anti-Cosmo Anti-Julius Anti-Cosma is the Anti-Fairy counterpart of Cosmo on The Fairly OddParents. He's one of the major recurring antagonist in the series, along with his wife Anti-Wanda and his son Foop. He's also the leader of the Anti-Fairies.

Since all Anti-Fairies are complete and utter opposites to their fairies counterparts, Anti-Cosmo is the total alternative to everything that makes up the original Cosmo.

While the normal Cosmo is amazingly dumb yet kind and caring, Anti-Cosmo is the opposite as he is an evil criminal mastermind and is very ruthless in his ambition to become more powerful so that he can cause even more bad luck among humans, an ambition shared by all his Anti-Fairies cohorts, of whom he is apparently the ringleader of.

After he is permanently freed from Jorgen Von Strangle's captivity, he and his race move to Anti-Fairy World where he rules over them from Anti-Cosmo's Castle where to this day, they are still a threat to the fairies.Anti-Cosmo has a blue and black color scheme consisting of a blue bowler hat in place of a crown, fangs, and bat wings like those of all Anti-Fairies. He wears a monocle over his right eye which he cannot see without, and wears a kind of coat or suit and, unlike Cosmo, Anti-Cosmo speaks intelligently with a stereotypical British accent.

Being Cosmo's complete opposite, Anti-Cosmo is far more intelligent, evil, and devious than most other villains in the show, let alone his counterpart Cosmo.

However, it is usually because of his dim witted wife, Anti-Wanda, that he fails at his plans, or otherwise Timmy gets the best of him. He is not been shown to get angry much (except with Cosmo who he regards as mind-numbingly stupid) and actually seems to usually take a curious delight when things don't go his way. He can be seen as a sore loser in "Balance of Flour". And in "Fairly Oddlympics" he can be seen as a cheater. 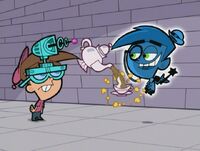 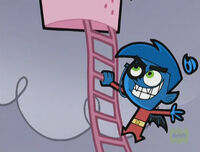