Nickelodeon
Register
Don't have an account?
Sign In
Advertisement
in: Avatar: The Last Airbender characters, Animals, Pets,
and 3 more

Appa (阿柏 Ā Bǎi?) is a fictional character on Avatar: The Last Airbender and in the film The Last Airbender. In the series, Appa is the only known living sky bison, a species of animals that can fly naturally, and is the animal guide of the protagonist, Aang. Dee Bradley Baker voices Appa, along with all the other animals, in both the TV series and the film.

The show's creators Michael Dante DiMartino and Bryan Konietzko have described Appa's appearance as a cross between a buffalo and a manatee. According to an interview with the artists involved with creating the show, Appa's design was based on that of Catbus from the movie My Neighbor Totoro, as they found it difficult to create a six-legged mammal.

In the Avatar franchise, Appa is the last known living sky bison, which are large mammal-like creatures that fly through airbending and steer through air currents with their broad tails. The bison are covered in thick white fur with a large brown arrow marking that is remarked to be extremely itchy. In the show, the markings on the flying bison's backs are what inspired the tattoos which symbolize an Air Nomad's mastery of Airbending. Their fur is shed at the end of winter. The Air Nomads summon the sky bison to their side through the use of whistles that only the animals can hear. Aang and friends use the words "yip yip" to get Appa to take off into the air.

Like all animals in the Avatar series, Appa cannot speak.

Throughout the series, Appa has demonstrated high intelligence and often appears to understand a portion of human speech, whereas Momo, the winged lemur, struggles to understand. Although placid, Appa has shown himself capable of fighting when necessary.

Other aspects of Appa's character include his fear of fire and his trusting of those who have been kind to him. He can become quite temperamental towards anyone who he thinks is a threat to himself or his friends, especially Aang. Conversely, he has demonstrated an unrestrained affection towards those that he likes. Appa also has a fear of going underground or in small tunnels, evidenced by his claustrophobic panic in the episode "The Cave of Two Lovers".

He has a special friendship with Momo the lemur, with whom he is often in company. Appa also shows a special preference towards Zuko, who saved him from his imprisonment beneath Lake Laogai. 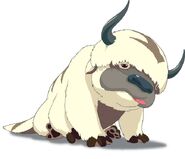