Nickelodeon
Register
Don't have an account?
Sign In
Advertisement
in: Shows, films, and people with wikis, Cancelled shows, Are You Afraid of the Dark?,
and 10 more

Are You Afraid of the Dark?

Are You Afraid of the Dark?

Are You Afraid of the Dark? is a Canadian horror/fantasy-themed anthology series. The original series was produced by the Canadian company Cinar and distributed by Nickelodeon. The show was filmed in Richmond, British Columbia and Montreal, Quebec.

A revived series with new directors, writers, and cast was produced by Nickelodeon from 1999 to 2000 and also aired on SNICK. The sole member from the original lineup to return for the sixth and seventh seasons was Tucker (Daniel DeSanto), although Ross Hull returned for the concluding miniseries, which notably broke from the show's established format by blurring the line between story and reality.

Both series of Are You Afraid of the Dark? revolves around a group of teenagers who referred to themselves as the Midnight Society. Every week, at a secret location in the woods, one member would tell a scary story to the group. The actual story, rather than the telling, was displayed to the television viewer. The story was shown between the group's arrival at the site and their departure. Each storyteller would begin their story by saying "Submitted for the approval of the Midnight Society, I call this story..." at which point they would toss out a handful of non- dairy creamer (which the characters referred to as "midnight dust") from a leather pouch into a campfire to heighten the flames and produce an eerie white smoke. The storyteller would continue by announcing its title (The Tale of...).

The themes of the stories usually revolves around a variety of paranormal phenomena, such as ghosts, goblins, magic, dragons, haunted houses, magical curses, aliens, witches and the like coming into contact with average youths. Usually, the episodes were either filmed in the woods, in abandoned houses, or in public places like schools or libraries.

Sources of these tales vary in different ways; many were adaptations of public domain fairy tales and short stories or urban legends. For example, the episode "The Tale of the Twisted Claw" is an adaptation of W.W. Jacobs' legendary short story "The Monkey's Paw".

Sometimes, the stories were inspired by a certain event in the life of the storyteller. In the episode "The Tale of the Crimson Clown", for instance, Tucker blackmailed his brother Gary with a poem he had found, which Gary had written for Samantha. Gary then told a story in which a naughty younger brother was punished cruelly for his evil deeds. At the end of the episode, Tucker gave the poem back to his brother.

Each story had its own twist, such as in "The Tale of the Dream Girl" where the main character, Johnny, ended up being the ghost's boyfriend all along, and thus, he too was a ghost.

One of the more significant recurring characters was Sardo (Richard Dumont), owner of "Sardo's Magic Mansion" (a magic shop). He would often attempt to sell a character a "prized" item, rarely succeeding. He often had items in his shop that contained real properties of magic, yet did not know until it was revealed in the story. One of the most memorable recurring jokes in the series occurred when someone would address him as "Mr. Sardo". He would then get irritated and exclaim: "No 'mister'; accent on the 'doh'!" Although he rarely got what he wanted, he would often end up helping the characters, often intentionally. He appeared in Gary's stories.

Another recurring character was Dr. Vink (Aron Tager). He was a physically imposing man who would often appear as a mad scientist, sorcerer, and the like. He would also get his name mispronounced. When this happened, he would respond "Vink. With a va-va-va." Often, the protagonist would call him a "nutbag" behind his back, assuming he could not hear him, only to have him reply later, "...and I am not a nutbag." He appeared in Frank's stories. Aron Tager also played the carnival worker who stands in front of the Funhouse and invites people to go inside in "The Tale of the Laughing in the Dark".

Both of these characters appear in the double episode "The Tale of Cutter's Treasure", which was told by both Frank and Gary.

→ Main article: Are You Afraid of the Dark? episode list

23 chapter books based on the series were written by various authors such as John Peel and were published between 1995 and 1998.

→ Main article: Are You Afraid of the Dark? videography 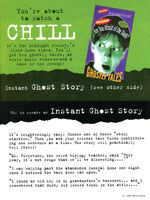 1994 postcard ad for the first home video (front and back)

Advertisement for the associated PC game, The Tale of Orpheo's Curse.

Camp Nickelodeon print ad for Ren and Stimpy and Are You Afraid of the Dark? VHS tapes

The topic of this page has a wiki of its own: Are You Afraid of the Dark? Wiki.