Abner the pig; Chester, Fester, and Lester the pigeons

Noise, being called "football-head" by Helga, bullies, Helga (formerly), his street was destroyed, losing his parents, Scheck, April Fools jokes (formerly), his cousin Arnie, getting in trouble, detention, lies, being framed, his friends in danger, Lasombra

Arnold Phillip Shortman is the protagonist on Hey Arnold! He is an average fourth grade student with football-shaped head and a small blue hat that almost never leaves his head. Born in San Lorenzo during a volcanic eruption, he is a calm nine-year-old dreamer, and an idealist who always tries to see the best in people and to do the right thing. Whenever he sees someone in trouble, Arnold goes out of his way to help them out, even if it is not sensible to do so. All he wishes for is peace in the world.

Arnold lives in a boarding house with his grandparents. His parents, Miles and Stella, are off in a place called "San Lorenzo". Along with his classmates, including his best friend Gerald Johanssen, Arnold attends P.S. 118, and is often the target of constant mockery by Helga Pataki, who has a secret major crush on him. According to the future seen at the end of the episode "Married", he and Helga eventually live a happily married life at some sort of beach place.

As a running gag, Arnold's last name is never directly stated in the series, but Craig Bartlett confirmed in an interview that his last name is "Shortman", a name he is often called by his grandfather. This was eventually shown onscreen in Hey Arnold!: The Jungle Movie, when Arnold signs it on his passport and later said by Phoebe when the adults come to save them.

Another running gag is that Arnold seems to have a thing for older women, as he has had crushes on Ruth, Olga, and at one point, his substitute teacher (much to Helga’s jealousy).

To some, it may look like Arnold is wearing a kilt, but that's actually not true. In the episode "Cool Party" it was proven in the beginning of the episode that, that in fact is not true. Arnold lifts up his sweater to show that it is his shirt. And of course, the blue on his legs are his jeans.

Arnold in "live" form at the premiere of Hey Arnold!: The Movie.

Arnold with Craig Bartlett and his daughter Katie. 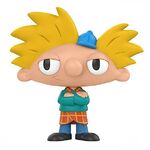 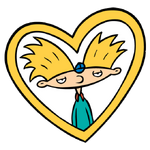 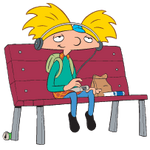 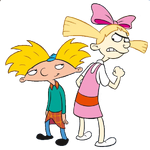 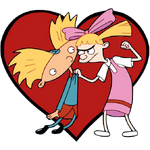 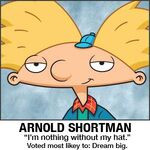 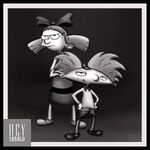 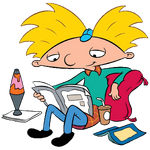