Nickelodeon
Register
Don't have an account?
Sign In
Advertisement
in: Character stubs, The Loud House characters, The Casagrandes characters,
and 11 more
English

Arturo Santiago
The Loud House and The Casagrandes character

His kids, his family
Dr. Arturo Santiago is the father of Bobby and Ronnie Anne Santiago from The Loud House, who was rarely mentioned and never seen prior to the advent of its spin-off, The Casagrandes. He is first mentioned in "A Tale of Two Tables", in which it is revealed that he had a hernia operation; when Lynn Sr. asks Lori how it went, Lori simply answers, "Um... okay, I guess."

When Lincoln visits the Santiago house in "Shell Shock", Mr. Santiago is nowhere to be seen, and he does not move to Great Lakes City with his wife and kids in "The Loudest Mission: Relative Chaos", indicating that Maria is raising Bobby and Ronnie Anne as a single parent. However, in "Garage Banned", Bobby mentions over his phone call to Lori that "Papa thought he saw a mouse in the store," possibly referring to his father paying him a visit.

It is eventually revealed in The Loud House's fourth-season premiere, "Friended!", that he and Maria are separated (and later confirmed in The Casagrandes episode "Operation Dad" that they are divorced) and that he works as a doctor in Peru.[1] Despite no longer living with his kids, he still loves them and always keeps in touch with them through video calls, and is also on good terms with his ex-wife; and her family (except for her father, Hector). Eventually, at the end of The Casagrandes episode "Operation Dad", he himself moves to a separate apartment elsewhere in Great Lakes City so that he can spend more time with his kids and his family and stay permanently with them. 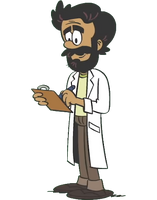