Charlotte's Web
Back at the Barnyard

Barnyard (also known as Barnyard: The Original Party Animals) is a 2006 American computer-animated family comedy film from the creators of The Adventures of Jimmy Neutron, Boy Genius, produced by Paramount Pictures and Nickelodeon Movies, directed by Steve Oedekerk (who was also the principal screenwriter), and produced by Oedekerk and Paul Marshal. It was released in theaters on August 4, 2006.

Despite receiving negative reviews, the film was a box office success, grossing $116 million worldwide against its $51 million budget, eventually spinning off into the series Back at the Barnyard.

Otis (Kevin James) is a male holstien dairy cow with an udder who prefers to goof off rather than accept responsibility. His father Ben (Sam Elliott) is the leader of the barnyard when the farmer is away, giving the animals the safest moment to spring up on two legs. After Otis interrupts a barnyard meeting with his wild antics, Ben has a talk with his son, in which he tells him that he'll never be happy if he just goofs off, and that he should grow up. Otis ignores his advice and leaves to have fun with his friends Pip (Jeff Garcia), Pig (Tino Insana), Freddy (Cam Clarke), and Peck (Rob Paulsen). That same day, Otis meets a new yet pregnant cow named Daisy (Courtney Cox), accompanied by another girl cow named Bessy (Wanda Sykes).

That night, the animals throw a massive party in the barn; all the animals are there except Ben, who watches over the fence, which marks their space. Otis is assigned his shift along with him, but he talks himself out of it, saying that he's needed for a certain role in the party barn. Ben talks with Otis and says that the day he found him alone in the meadow, the stars danced. Otis is given the privilege to party out, and the thankful son runs to the barn. Later on, Ben has to take on a pack of coyotes led by Dag (David Koechner), who is raiding the chicken coop. Ben manages to fight off the pack until he's bitten on the leg by Dag, making him fall. The coyotes pile on Ben, but he manages to grab Dag and escapes the pile. He threatens to punch Dag, but lets him go, scaring him and the coyotes off. The hens cheer, but Ben falls on the ground, exhausted. Etta (Andie MacDowell) runs into the barn and tells Otis and he runs outside to his father. Ben opens his mouth as if to say something, but then dies. He is then buried on his hill by the farmer. His grave says, "BEN- a good cow."

After Ben's death, all the animals elect Otis as the new leader of the barnyard, presumably because he's a born party animal. An old mule named Miles (Danny Glover), who was lifelong friends with Ben, kicks the farmer (Fred Tatasciore) because he saw the animals on two legs, knocking him out. He shirks his duties by leaving Freddy and Peck in charge of the coop, helping three trouble-making cows called the Jersey Cows Eddy (S. Scott Bullock), Igg (Maurice LaMarche), and Bud (John DiMaggio) in teaching a lesson to a fat brat called Snotty Boy (Steve Oedekerk), who enjoys cow tipping, and being chased by police and a helicopter on the TV show COPS in the Beadys' 1960 Chevrolet Impala. Later that night, when Otis is sitting with Daisy and holds Daisy's hoof while looking up at the stars, he overhears the coyotes chasing a rabbit and leaves Daisy and chases after the coyotes to avenge his father. Otis tries to attack Dag and his men, but he's outsmarted by them. Since Otis is weaker, Dag orders a deal that he and his pack will take animals here and there, and if he tries to stand up for all of them, they'll slaughter everyone. Otis decides to leave the barnyard, realizing that he has no chance.

The next morning, before leaving, Otis is informed that the coyotes took some hens and a chick named Maddy (Madeline Lovejoy), who is one of Otis' best friends. Otis realizes that he has been backstabbed by Dag as he wasn't expecting him and the coyotes until tonight, and sets off to rescue the poultry. Otis confronts the pack, but is easily defeated after Dag bites him in the leg, just like Dag did to Ben; however, Otis is a stronger cow to survive the injury.  Pip, Pig, Freddy, Peck, and Miles arrive to help Otis, along with the Jersey Cows and the gophers. Dag tries to kill Otis from behind, but Otis is alerted when Peck successfully manages to crow a warning. Otis catches Dag and tells the coyote to never return. Dag is then swung out of the junkyard by Otis' golf skills.

That night, Otis and the gang make it back to the barnyard, finding that Daisy went into labor after Otis left to face the coyotes. She gives birth to a calf whom she names Ben. Duke (Dom Irrera), the farmer's sheepdog, asks Otis if he wants to stay and be their leader. Otis agrees, and everyone cheers as he walks outside finding the stars dancing. The movie ends with one last scene where Mrs. Beady is getting ready for bed, but she noticed that Wild Mike is on top of her head in her hair while looking herself at the mirror in her bedroom in her house.

Barnyard was released on widescreen [1] DVD on December 12, 2006, and includes an alternate opening as a bonus feature.[2]

The film has received generally negative reviews. The film has a "Rotten" rating of 22% at Rotten Tomatoes, based on 95 reviews, with an average rating of 4.4/10. The site's consensus says, "Unimaginative and unfunny, this tale of barnyard mischief borders on 'udder' creepiness and adds little to this summer's repertoire of animated films."[3] On Metacritic, it has a score of 42 out of 100, indicating "mixed or average reviews".[4]

Barnyard was released on August 4, 2006, and opened to 3,311 theaters. This film opened at #2 at the box office on its opening weekend behind Talladega Nights: The Ballad of Ricky Bobby, earning $16 million at the domestic box office. It closed on November 2, 2006 and has grossed $73 million in its domestic theatrical release. It has made $116 million in its worldwide theatrical release, becoming a box-office success.[5]

The soundtrack was released on August 22, 2006 by Bulletproof Records. It includes an original song by indie pop band the Starlight Mints and "You Gotta Move" by Aerosmith.[6]

A video game based on the film was produced by THQ and Blue Tongue Entertainment. It is an adventure game which you name your own male/female cow and walk around the barnyard and play mini-games, pull pranks on humans, and ride bikes, plus party hard. The game was released for PlayStation 2, Nintendo GameCube, Wii, PC and Game Boy Advance.

→ Main article: Back at the Barnyard

On September 29, 2007, a CG animated television series based on the film and titled Back at the Barnyard premiered on Nickelodeon. Chris Hardwick replaced Kevin James in the role of Otis, and Leigh-Allyn Baker voiced Abby, who replaced cow Daisy.[7] The series ran for two seasons, and ended on November 12, 2011. 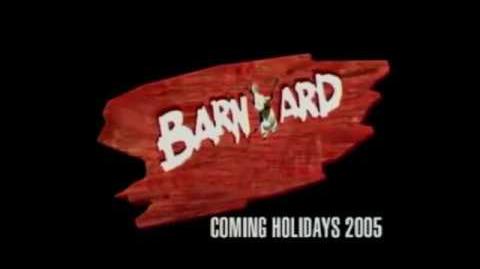 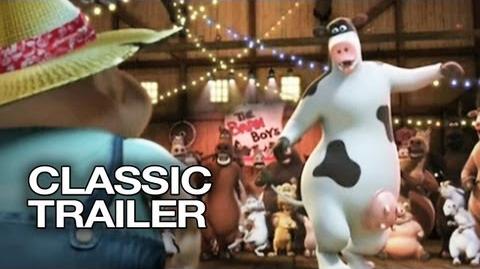 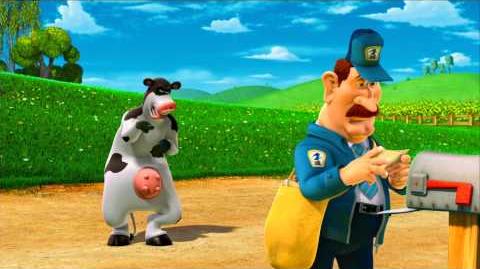 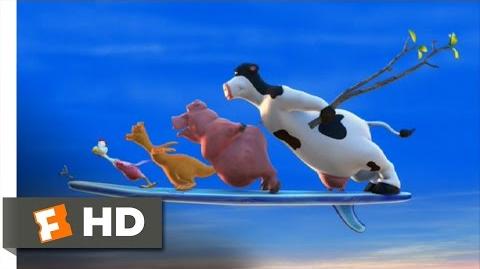 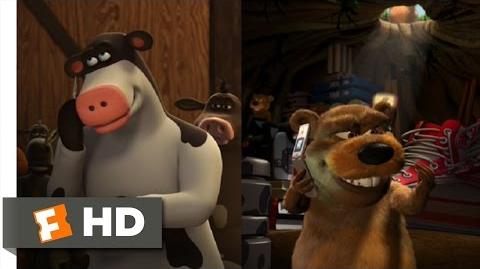 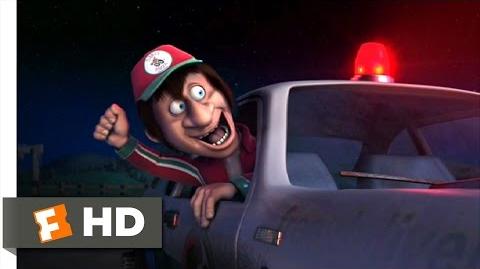 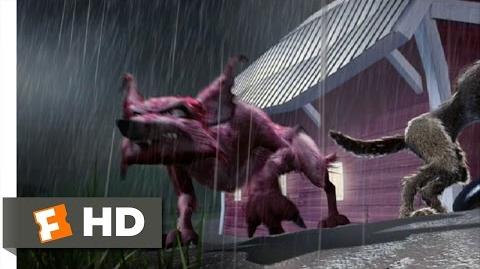 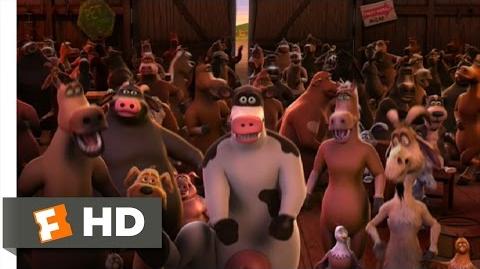 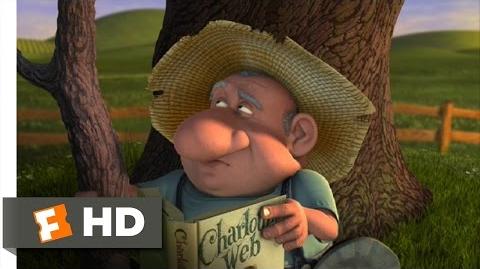 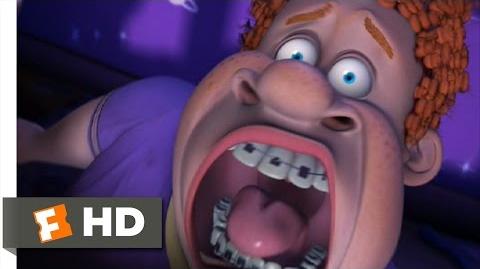 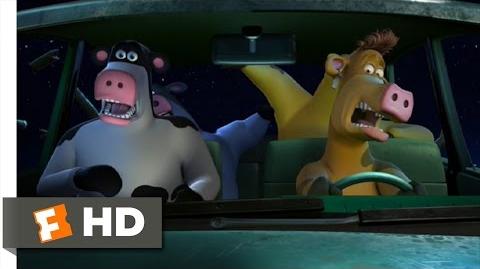 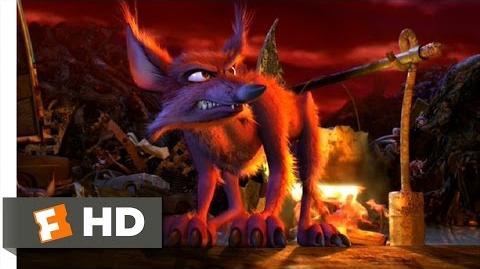 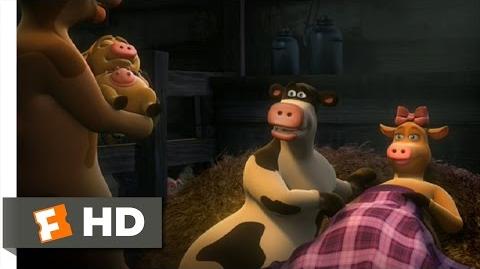