Falling; not getting to kiss Luan

"Did she just announce herself?"
Benjamin "Benny" Stein is a character in The Loud House, debuting in the second-season episode "L is for Love". He is a schoolmate of Luan, who has a crush on him, which is later revealed to be reciprocated in the next season's "Stage Plight".

Like Luan, Benny is a positive boy with a fondness for comedy. He likes school plays, miming, and jokes. He seems to be more down-to-Earth compared to his girlfriend, as he comes to help her deal with her emotional problems, such as not caring that she has a zit during their first date in "A Pimple Plan". Benny also has a marionette that he keeps as a companion, named Mrs. Appleblossom, much like Luan's ventriloquist dummy, Mr. Coconuts. On weekends, he works as a popcorn vendor at Dairyland.

He has fair skin and dark brown curly hair. He wears a two-tone light blue and white button up shirt, dark gray jeans, and white sneakers. 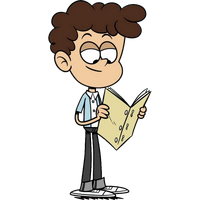 Luan and Benny looking shy around each other.