Bessie Higgenbottom
The Mighty B! character

"Bessie Higgenbottom reporting for duty! (trips)"
"I'm not the Mighty B yet, Ben, I still have 4,584 badges to go!"
"(in Mighty B form) Prepare to face the awesome sting of the Mighty B!"
"Hey you guys! Are you ready to rock this bad boy?"
"Pen, we're done. We're hanging up our tights."

Bessie Higgenbottom is the main protagonist of The Mighty B! Her lifetime goal is to collect every Honeybee badge to become her alter-ego superhero known as The Mighty B!. She has total devotion to the Honeybees. She currently is living in an apartment above her mom's cafe in San Francisco with her dog and best friend Happy.

Bessie is often portrayed as a wildly imaginative yet beautiful, ambitious, cute, confident, friendly, innocently naive, hyperactive, nerdy, smart, optimistic, spunky, and a hardworking young honeybee scout. She is a devoted member of the Honeybees and has the most badges in Honeybee history. In the episode "Bee Nice", Bessie says her policy is to give kindness, and courtesy to everyone she knows. Bessie can also be naive and sometimes has no backbone until she is driven to the edge. Although she can be a little irresponsible and even a little bossy and hyper-critical despite her beauty. Bessie is sometimes shown to be a bit mature for her age. She can also be prone to jealousy. Bessie loves taffy-selling season and often thrives to sell the most boxes. Her role model is the founder of the Honeybees, Miriam Breedlove. Bessie always sends her emails if something is wrong or if she wants advice. Bessie always is a strict follower of rules and regulations especially with the Honeybees. Due to her talkativeness Bessie can easily annoy people. She can be described as part tom-boy, girly-girl, and half brainiac. Also Bessie can be funny or helpful.

Happy is Bessie's pet dog and her best friend.

Penny Wabigal Lefcowitz is Bessie's best long life friend, through-out the show, she mostly goes with Bessie on so many adventures.

Ben is Bessie's little brother who hopes that he will become her sidekick when she becomes the Mighty B. So, much to Bessie's dismay, Ben usually tags along with her adventures and usually comes up with an idea without the credit.

Bessie usually proclaims Portia as a friend when in reality, Portia would usually mess with Bessie. However, Bessie would be too naïve to know that Portia is messing with her.

Bessie looks up to Rocky and thinks that he is really cool. 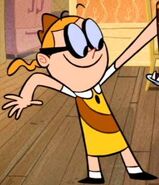 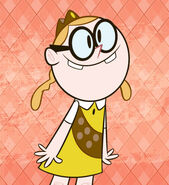 Add a photo to this gallery
Retrieved from "https://nickelodeon.fandom.com/wiki/Bessie_Higgenbottom?oldid=124450"
Community content is available under CC-BY-SA unless otherwise noted.