Cindy Vortex (a bit one-sided on Cindy's side)

Betty Quinlan is a supporting character from Jimmy Neutron. She is a student at Lindbergh Elementary School and Nick's female counterpart, whom Jimmy has a crush on for most of the series, though she does not seem to return the favor and seems to only be flattered by Jimmy's affections. As a result of Jimmy's crush on her and how talented and pretty she is, she and Cindy do not get along well. She enjoys performing in front of an audience. While Betty likes Jimmy and is flattered by his affections, she doesn't return his feelings and she knows he belongs with Cindy and is fully supportive of him and Cindy being together.

Betty is a pretty girl who is usually seen wearing a pink dress. She is relatively slim, with dark brown hair, and white layers of clothing. 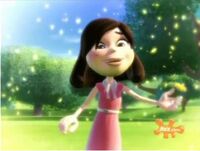 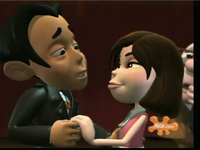 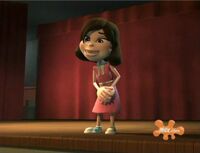 Retrieved from "https://nickelodeon.fandom.com/wiki/Betty_Quinlan?oldid=223283"
Community content is available under CC-BY-SA unless otherwise noted.