Nickelodeon
Register
Don't have an account?
Sign In
Advertisement
in: The Fairly OddParents characters, Characters, Females,
and 5 more

Self-centered, vain and jealous (the absolute opposite of her twin sister Wanda).

Looks almost exactly like Wanda except that she has blonde hair, which is actually dyed.

To win the Zappy Award (because it's her goal)

Wanda (after Blonda's Zappy actually turned out to be Wanda's)

"Sometimes, I wish I had just lived the simple life, like my sister."

Blonda Fairywinkle is Wanda's "identical yet somewhat hotter" twin sister who, according to Wanda, chose the easy life of becoming an actress. Blonda stars in a Fairy World soap opera called "All My Biceps", which is also Jorgen's favorite show. She is a direct parody of Susan Lucci.

Blonda looks almost exactly like Wanda except that she has blonde hair, which is actually dyed. She is the only fairy in Fairywood that has never won a Zappy Award and was one of the judges on Fairy Idol, where it was revealed that she isn't a natural blonde.

Being twins, Blonda is almost completely identical to Wanda in appearance, but she is usually shown wearing much more expensive looking clothing, and has blonde hair which was revealed to be a dye job. Her real hair color is brunette (as shown in "Fairy Idol").

She has been known to be more self-centered and vain compared to her sister, Wanda and always believed she had it harder than Blonda for her life as an actress, although in the end it was all resolved; however shortly after they began to make up with each other, they soon began to hate each other again after Blonda's Zappy actually turned out to be Wanda's. She is secretly bitter when it comes to the fact that she had never won a Zappy before, while every other fairy has.

Blonda first appears in the episode "Blondas Have More Fun!" where her existence is first revealed. She and Wanda switch places after an argument over who has the harder life. Blonda acts as Timmy's godmother, while Wanda becomes a Fairywood actress. In the end, they agree that both their lives are hard, and temporarily reconcile, but when Wanda wins an award that was meant for Blonda, they quickly begin to bicker again. This was her only prominent appearance.

In the episode "Big Wanda", after Blonda and Wanda's father Big Daddy disappears, Wanda is given control of her family's "magic garbage recycling" business. She asks why Blonda was not picked, whom appears on a television screen talking about her father's disappearance, and how she will use it to motivate her soap opera character, although Blonda cannot remember her father's name. Wanda turns the television off and agrees to run the family business (but only until Timmy and Cosmo find Big Daddy).

Blonda appears again in "Fairy Idol" as a judge for the competition of the same name, but does not play much of a role, and is voiced by Tara Strong (Timmy's voice actress) as opposed to Susan Blakeslee (Wanda's).

Blonda oddly did not make appearances after the birth of her nephew Poof. However, it's possible that due to the rivalry between Wanda and Blonda, she was simply not invited or informed. 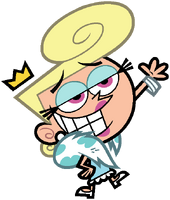 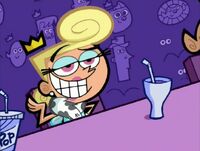 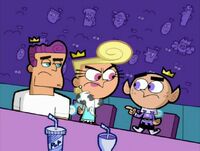