The Fate of Bloom (Nickelodeon debut)

Bloom is the protagonist of Winx Club. She is the Fairy of the Dragon Flame and the Winx Club leader. Bloom uses fire-based attacks and is the most powerful fairy on the team. She is Sky's fiancée.

Bloom is voiced by Molly Quinn.

Bloom has light skin and blue eyes. She has long, orange-red hair. Almost all of her outfits are mostly blue, matching her eyes.

Until discovering her potent magical powers, Bloom was a little insecure. With a few years of training, she became a very confident and strong leader. She is incredibly capable as a fighter, easily manipulating her flame and heat powers. Bloom can ignite large fires and control dangerous infernos through her thoughts. Her status as the Dragon Flame Guardian has been her greatest strength and greatest weakness. While it makes her arguably the most powerful fairy in the Magic Dimension, it also consistently draws enemies to her, such as the Trix, Darkar, and Valtor.

"Bloom thinks she's an ordinary teenager, but everything changes when she discovers the truth that she's a fairy! Now Bloom's off to the Alfea College for Fairies in the Magic Dimension, where she becomes the leader of the Winx Club. As the Fairy of the Dragon Flame, she is the most powerful fairy. It's an awesome responsibility, but she'll use her unique power to defeat evil, like the Trix trio of witches, and guide her fellow fairies in the fight against evil. When she's not saving the world, Bloom likes to kick back with her friends, read and play with her pet rabbit, Kiko." — Nick.com

Bloom vs. Plankton in a Nick.com game 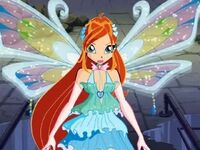 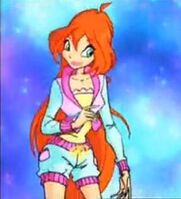 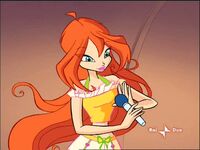 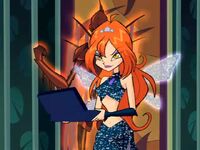 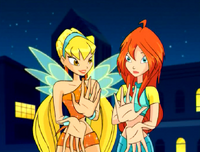