Owls (formerly), Green Puppy (Magenta in the remake) knocking down her block tower, being unable to reach her toothbrush

"Hoop-dee-doo!"
"Hi, you! It's me, Blue!"
Blue is the titular deuteragonist and co-host from the Blue's Clues franchise and the main protagonist and host of Blue's Room. She lives with her owner Steve & Joe. Blue is always excited to have the viewers come over to her house and to help her figure out what Blue wants by leaving a pawprint on 3 random objects better known as Blue's Clues. Blue happened to be a clue 3 times. Blue is ready to learn new things. She'll even tell you no by nodding side to side & yes by nodding up & down. Whenever Steve or Joe ask a question, Blue would just have them guess by leaving a pawprint on the screen meaning that she wants them to play Blue's Clues. She appears in every episode of Blue's Room where she is able to talk and walk on her hind legs. She was born on a farm in a book called About a Puppy with other dogs but skidooed out of it.

Blue is considered to be a friendly energetic puppy. She acts like a human and leaves her pawprint around the house. She'll even leave her pawprint in some skidoo segments. Blue barks on all of the syllables in the sentences she means in the main series. However, Blue speaks English in Blue's Room. Blue was first introduced when she skidooed out of her own storybook which was called "About A Puppy". When Blue skidoos, she turns in a circle and jumps into picture frames or storybooks. Blue is seen skidooing back home onscreen, but on some episodes, she skidoos offscreen.

Blue is a blue dog with dark blue spots and a dark blue nose. Her eyes are white with black pupils. Her tongue is pink when she licks something or barks. 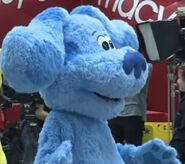 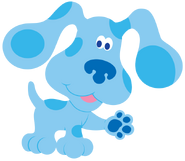 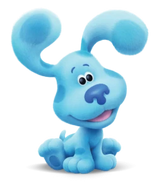 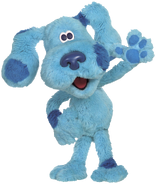 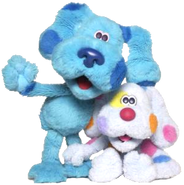 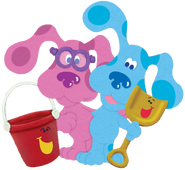