Boog is the main antagonist of Fanboy & Chum Chum.

When Boog was little, he had to stay in a plastic bubble on account that he was allergic to everything. When he accidently bopped himself he said "someday when I get out of this bubble I'm gonna inflict this kind of pain on others someday... someday..." and he has done so.

Now, the only employee of the Frosty Mart to Lenny Flynn-Boyle, Boog is now a bully who isn't afraid to get in anyone's way. He almost plays Chimp Chomp all the time, and has the urge to bop almost anyone.

Boog is a short-tempered bop-happy bully who is obsessed with the video game Chimp Chomp, which he plays at the Frosty Mart, often instead of working. He even has the urge to bop anyone. Whenever someone is in his way, he bops them with his mighty bopping fist. Usually, before bopping, he says something very serious to him (i.e. "I'm so bopping you!"). He also has a tendency to cry out for Chimp Chomp at times, especially when giving up part of it for something he really wants.

Boog is big, taller than almost anyone, and is pale apricot skinned. He has a large, blonde mullet with bangs swoopt to the left, and has a goatee to match.

Boog usually wears a light blue shirt with shreads at the sleeves and a white collar, with grey jeans, under his Frosty Mart uniform. He wears a pair of black ankle boots on his feet, perfect for marching up to someone to bop them. He also wears a red, white and blue wristband on his right wrist, which he considers a sign of bopping 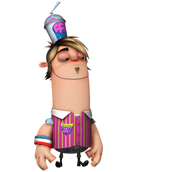 Retrieved from "https://nickelodeon.fandom.com/wiki/Boog_Shlizetti?oldid=270944"
Community content is available under CC-BY-SA unless otherwise noted.