Brit and Tiff Crust
My Life as a Teenage Robot character

Brit: "How dare that sheet-metal twit try to steal our spotlight!"
Tiff: "What if she actually becomes *popular*?

Brittany "Brit" Crust and Tiffany "Tiff" Crust are Jenny Wakeman's classmates in My Life as a Teenage Robot. Brit shows the stereotype of the stuck-up rich girl, whereas Tiff acts like a street-smart punk-girl. These two are the popular kids in school and will do anything to humiliate Jenny (even getting help from the Mudslinger, a grungy reporter, at one point), even despite Jenny having saved them a couple of times (even without getting a "thank you"). Upon first meeting them, Jenny was eager to be friends with Brit and Tiff and was oblivious to their displeasure towards her, but she soon began seeing them as they truly were and became their biggest rival at Tremorton High. The girls become the main villains in the season one episode "Dressed To Kill" when they harness the power of the Pip Crystals, a highly powerful and dangerous space mineral lost by the Cluster's own Smytus, which were sprinkled all over their prom gowns. The fight over the Pip-Crystals ended when Jenny cleverly showed the Crust cousins a magazine article deeming crystals out of style, and the crystal-covered gowns were locked away.

In "Victim of Fashion", Jenny and the Crust Cousins engage in a "down and dirty fashion war" in which Jenny downloads all the latest styles into her transformation data banks to upstage her competition. It was when the Crust Cousins pulled the thin look to counter all of Jenny's "bigger and better" outfits that Jenny had Sheldon remove her weapon systems ("It's better to be fashionable than functional"), ultimately making herself vulnerable to the Space Biker Gang. On the day these events took place, Britt and Tiff had dressed as motor unicycles to "beat Jenny at the transformation game," prompting the Space Bikers to use them as their getaway vehicles. It is unknown how and when they were rescued and returned home.

Amidst the many pranks pulled between the Crust Cousins and the newly formed duo of Jenny and Misty, the former member of Teen Team who returns in "Teenage Mutant Ninja Troubles," it is revealed that Brit is afraid of heights, Tiff is afraid of spiders, and both are very afraid of nerds. The cousins play very minor roles in "Escape from Cluster Prime", siding with whatever side appears to have the upper hand at the time. They get their justice for their flip-flopping "loyalty" when they are caught in the dust fallout from the explosion of the robot factory, ruining their outfits. In the season three episode "Queen Bee," the Crust Cousins help Vexus, disguised as a teenage robot named "Vicky", to become cool at Tremorton High in order to initiate a plan to destroy Jenny under her radar. However, they ultimately save Jenny when Vicky becomes even more popular than them. 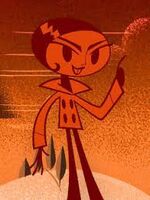 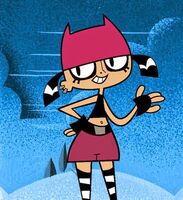 Add a photo to this gallery
Retrieved from "https://nickelodeon.fandom.com/wiki/Brit_and_Tiff_Crust?oldid=252821"
Community content is available under CC-BY-SA unless otherwise noted.