Nickelodeon
Register
Don't have an account?
Sign In
Advertisement
in: Shows with wikis, Nicktoons, Bunsen Is a Beast,
and 6 more
English 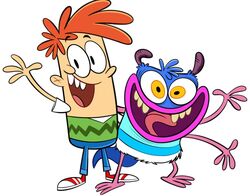 Bunsen Is a Beast centers around a blue monster named Bunsen, who is the first beast to attend Muckledunk Middle School. Mikey Munroe, his human friend, helps him navigate through school as he feels the pressure to prove that monsters can coexist peacefully without eating or harming others. Episodes typically focus on Bunsen learning how to complete human tasks or discovering a human tradition. Mikey also learns more about the monster world, meeting new creatures whenever he visits Bunsen's home. However, a girl named Amanda Killman believes Bunsen is dangerous and wants to destroy him so that his kind will suffer from extinction. Bunsen and Mikey must outwit Amanda whenever she comes up with a new scheme, occasionally with the help of their friend Darcy.

The idea for Bunsen Is a Beast originated in a drawing of a monster facing a boy that Hartman drew in 2009. According to an article published in Variety, he kept the drawing in his office at Nickelodeon until a network executive noticed it and asked him to pitch the concept as a television show. The message that "no matter who you are, you can always find a place to fit in" inspired the show's underlying theme of embracing integration. When asked in an interview with Heidi MacDonald's Comics Beat if the show could be interpreted as a metaphor for "accepting and befriending refugees," Hartman mentioned that the social commentary was "a little bit" intentional. Animation began about a year before the show premiered.

→ Main article: List of Bunsen is a Beast characters

This show received positive reviews. Robert Lloyd of the Los Angeles Times praised the show in his review, likening it to "an early Hanna-Barbera cartoon with the engine of Tex Avery at his eye-popping extreme" and commending its message about embracing outsiders as "particularly timely."

This show has a wiki of its own: Bunsen Is a Beast! Wiki.