Cap'n Turbot is a human character in the Nick Jr. series PAW Patrol. He is voiced by Canadian comedian Ron Pardo and debuted in the show's first episode, "Pups Make a Splash."

Cap'n Turbot is tall with fair skin and brown hair. His standard outfit consists of a red cap, a blue polo shirt, yellow suspenders and brown boots. He wears blue glasses of a square shape.

Cap'n Turbot is the most frequent caller of the PAW Patrol. He owns the Seal Island Lighthouse and a boat dubbed the Flounder. His favorite activities include spending time with the pups and studying the ocean. Cap'n Turbot is very clumsy, and this trait often causes him to mess things up and call the PAW Patrol for help. He is quick to panic in dangerous situations and often needs to be calmed down by Ryder and the others. Cap'n Turbot has a habit of speaking alliteratively and using complicated terms; the pups do not always understand him and sometimes need Ryder to translate for them. 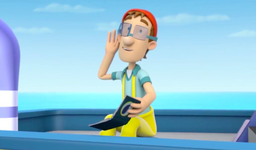 Cap'n Turbot on his boat 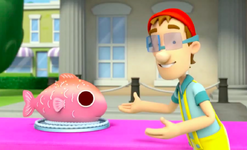 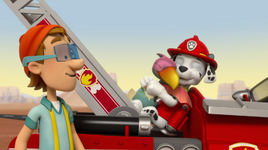 Cap'n Turbot in the opening sequence 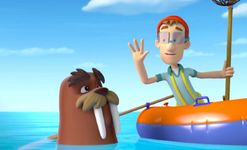 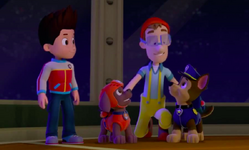 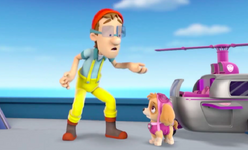 Cap'n Turbot and Skye
Add a photo to this gallery
Retrieved from "https://nickelodeon.fandom.com/wiki/Cap%27n_Turbot?oldid=116099"
Community content is available under CC-BY-SA unless otherwise noted.