Carol Pingrey is a schoolmate and former rival of Lori Loud on The Loud House. Sometimes mentioned during Lori's phone calls in the first two seasons, she is first seen in the Season 1 episode "Picture Perfect", when Lincoln says he'll have her take Lori's place in the family photo he's taking for his parents' anniversary. Lincoln also mentions the fact that Carol beat Lori for homecoming queen.

Carol plays a more prominent role in "Selfie Improvement" two seasons later. In this episode, Lori finds out that Carol's selfies are getting more likes than hers, and spends most of the episode trying to take a photo of herself to outdo Carol's. In the end, Lori ultimately realizes she shouldn't have obsessed over trying to compete with Carol and admits defeat to her. Carol, however, replies that she herself has always thought that Lori was better than her at everything, and personally envied Lori's golf skills and how well she got along with her siblings. Realizing how petty their rivalry has been, the two become best friends from that point onward.

Carol's most recent appearance was in the Season 4 episode "Senior Moment", in which she and another friend, Roger, join Lori in a series of activities meant to make their senior year worth remembering. 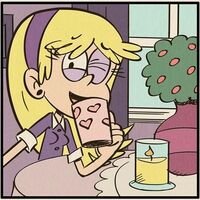 Lori and Carol take a selfie together after becoming best friends.