Nickelodeon
Register
Don't have an account?
Sign In
Advertisement
in: Characters, The Loud House characters, Bullies,
and 9 more
English

Lincoln and his friends (except some students), losing, House of Terrors, anyone's cheating, aliens, getting attacked by wild animals, getting detention, failure
Chandler McCann is a recurring antagonist on The Loud House. He is Lincoln's arch-nemesis and classmate who is introduced as the most popular student at Royal Woods Elementary.

Chandler is a freeloader and a conceited boy who despises Lincoln. He only invited Lincoln and Clyde to his birthday party because they gave him free stuff at the pizza arcade, and not because he likes them as friends. He also frequently calls Lincoln "Larry" and later "Lincoln Lame". He seemed to be very popular in elementary school, as seen in "The Waiting Game" when all the kids were excited to know who was going to be invited to his party. In "Jeers for Fears", he briefly acts respecting towards Lincoln and Clyde, but he goes back to being their rival as of "Wheel and Deal". He seems to have become even more of a bully towards Lincoln and his friends in middle school, actively bullying Lincoln and getting him in trouble for his antics, and also mocking Zach for believing in aliens. Perhaps for this reason, he no longer seems to be popular with his fellow students like he was in elementary school. He is also skilled at plotting and scheming to destroy Lincoln's life.

Chandler has fair skin and auburn hair in a hairstyle similar to Luna's. Like Lincoln, he has freckles on his cheeks. He wears a green long sleeve shirt with white sleeves, which has a print of a blue gear, black pants with a black belt, and white sneakers with green stripes.

In "Shell Shock" and "Jeers for Fears", his shirt is now yellow instead of green.

Starting from "Wheel and Deal", his shirt is now dark green with a white gear.

In all of his Season 5 appearances following "Schooled!" however, he wears the yellow shirt he wore in prior seasons.

In Season 6, however, his outfit reverts back to the dark green shirt he wore in Season 4.

In his debut episode, "The Waiting Game" in the first season, he invites all of Lincoln and Clyde's classmates to his birthday party that he annually throws at the sewage plant where his father works, but ignores Lincoln and Clyde. Then, when he sees Lincoln getting free food and tokens at Gus' Games and Grub because he helped Lori get a job there, Chandler gets Lincoln to do all sorts of favors for him, taking advantage of Lori's generosity towards her brother. He eventually does invite Lincoln and Clyde to his party, but in the end, Lincoln, seeing that his sister has to work overtime due to all the favors Chandler tricked him into doing, decides to skip out on Chandler's party and cover for Lori at the restaurant so she can go to the school dance with Bobby.

However, in the next season's "Wheel and Deal", Chandler is back to being in an antagonistic role, this time appearing as one of Lincoln and Lana's rivals in the Royal Woods soapbox derby. He is only interested in winning the race and doesn't seem to care about getting to meet Bobbie Fletcher like Lana wants to. Seeing how much better his and the other race-cars are over the one Lana has built leads Lincoln and his friends to try to cheat in Lana's favor during the race.

Starting in the show's fifth season, Chandler is now one of Lincoln's classmates in Mr. Bolhofner's class at Royal Woods Middle School (since Principal Ramirez doesn't work out for Lincoln to assign him to Mrs. Salter's class with his friends because there's no room left) and makes more frequent appearances. He has unfortunately become even more of a jerk to Lincoln and his friends than before, actively bullying and taunting Lincoln and getting him in trouble for his antics, and also mocking Zach Gurdle for believing in aliens. Perhaps for this reason, he no longer seems to be popular with his fellow students like he was in elementary school, and he also ends up in detention very often, to the point that he wins the "Best Detention Getter" award in "How the Best Was Won". He is most prominently featured in "Broadcast Blues", in which he convinces Lincoln and his friends to let him join the school's morning news program by buying them new equipment, and then uses his position on the crew as an excuse to bully other students. In the end, Lincoln and his friends get him to quit when they find out that he's been secretly selling stuff that washed up in his dad's sewage plant to afford the equipment and threaten to reveal this to everyone.

In the episode "Time Trap!", in the timeline where the Loud kids were never born, Chandler somehow became leader of Lincoln's friend group, even collectively naming himself and Clyde "Chyde McBrann", and turned all of them into bullies like him.

Outside of the show itself, Chandler also appears in the book Campaign Chaos!, in which he is Clyde's rival in the election for Royals Woods Elementary School's treasurer. He also appears in episode 13 of the Listen Out Loud podcast, in which he snags the table meant for Lincoln and Clyde, and wins a chance to spin the Wheel of Pizza at Gus' Games and Grub. 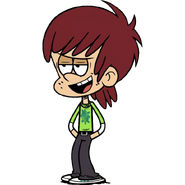 Chandler in his outfit from "The Waiting Game".

Chandler in his outfit from "Wheel and Deal".