Nickelodeon
Register
Don't have an account?
Sign In
Advertisement
in: Character stubs, The Loud House characters, Dogs,
and 7 more
English

Charles
The Loud House and The Casagrandes character

Charles Loud is the Loud family's pet dog on The Loud House. Although he generally does not play a large role, Charles makes frequent cameo appearances throughout the show. Because he seems to hang in Lincoln's room, and around Lincoln most of the time, it is possible he is mostly Lincoln's dog. He was adopted into the family when Lana found him and cried until they agreed to keep him. He's been with the Louds before Lincoln met Clyde, as shown in "Deal Me Out". 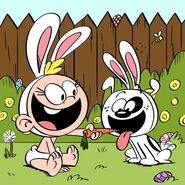 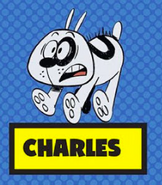 Charles and his owner Luan fighting over Mr. Coconuts