Savino got his start at Nickelodeon (and in animation in general) as a layout artist on The Ren & Stimpy Show. He then worked as a prop designer on Rocko's Modern Life, later worked as a writer and director on My Life as a Teenage Robot. He also worked on Hey Arnold! as a storyboard director, prop designer, background designer and character designer during its first season.

In early October 2017, Savino was suspended from production of The Loud House due to multiple allegations from co-workers of him committing sexual misconduct towards them. On October 19, 2017, multiple news outlets reported that Nickelodeon had fired Savino after conducting an investigation. Savino issued a formal apology on October 23, 2017.

My Life as a Teenage Robot 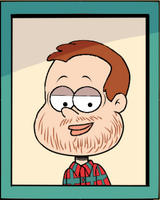 A cartoon version of Chris Savino appeared on the picture frame.