Phillip the Nickel; Snowball the Hydra; Carl the Ant; Cindy the Bee; Jimmy the Cat; Steven the Hog.

"I'm not bright, big words confuse me, I have the attention span of a rodent, and Wanda loves me anyway!"

Cosmo Julius Cosma is one of the main characters on The Fairly OddParents. He and his wife Wanda are currently Timmy Turner's fairy godparents. They have one son together, named Poof, born in the episode "Fairly Odd Baby". Cosmo, along with Wanda, were assigned to him due to the miserable life he was leading, they grant whatever he wishes for, often with errant results. In the shorts and early episodes, his voice was deeper and more suave, but now his voice is higher.

In Cosmo's past, he was a very destructive fairy-in-training in his youth, having turned his father into a fly and caused many accidents at the Fairy Godparent Academy, including sinking Atlantis nine times. Because Cosmo was so disaster-prone, all fairies were forbidden to ever have children again, and he became a social outcast who was bullied by everyone.

One day, Cosmo met Wanda at a fairy diner where he was working as a waiter and instantly fell in love with her, eventually proposing marriage to her with a chewed-up pen cap. But Cosmo's mother, Mama Cosma, really disliked Wanda, as she did not like the idea of her son settling down with anyone. In order to elope with Wanda, Cosmo ran away from home, telling his mother that he was going out to buy milk. By the events of the episode "Apartnership!", Cosmo and Wanda have been married for 9,895 years. A lot of things may have happened to them during that period, but most of them are unknown. They served as fairy godparents for Denzel Crocker in the early 1970's. Unfortunately, an incident involving their selves from thirty years later caused poor Denzel's secret to be revealed, and they were taken away from him. Their next assignment was evidently young Bill Gates.

Their time to care for Timmy Turner came about a year after he met Vicky and she began tormenting him. Timmy wasn't so positive about meeting Cosmo and Wanda at first, but after his first day with them, Timmy grew to love them like they were his best friends. Cosmo and Wanda usually transform into various animals and objects to avoid being seen by other people. Cosmo, along with his wife, Wanda, most commonly disguise as Timmy's pet goldfish. As Timmy's fairy godparents, they even gave birth to their own son, Poof, as a result of one of Timmy's wishes.

Besides the now-maniacal Crocker, the only other humans to know of Cosmo snd Wanda's existance include Vicky's sister Tootie (in the episode "Birthday Wish!" and the ending to A Fairly Odd Movie: Grow Up, Timmy Turner!), Remy Buxaplenty (Timmy's rival and Juandissimo's godchild), and fellow Nicktoon star Jimmy Neutron who, mistakenly believing that Timmy is also a genius, thinks Cosmo and Wanda are advanced holograms.

In the future depicted in the live-action telefilm, A Fairly Odd Movie: Grow Up, Timmy Turner!, Cosmo and Wanda manage to stay with Timmy thanks to his continuing to act like a child in his early adulthood. But when a now-beautiful Tootie comes back into his life, Timmy is driven to choose between remaining a mental child and keeping Cosmo and Wanda, or growing up and losing them so he and Tootie can be together. They and Poof are then taken captive by the evil oil tycoon Hugh J. Magnate Jr., but Timmy ultimately rescues them by confessing his love for Tootie, thus losing them due to officially growing up, but also freeing them from Magnate. As a result of Timmy saving them, a change is made to "Da Rules" in which Timmy is freely allowed to keep them as an adult, under the provision that he make unselfish wishes from now on, and Tootie is also allowed to know of their existence. Cosmo, Wanda and Poof then go on to help Timmy and Tootie in their new family business, "Wishful Thinking".

The epilogue for the movie Channel Chasers shows that Cosmo and Wanda will apparently be fairy godparents to Timmy and Tootie's own children, Tommy and Tammy Turner, later in the future. However, the timeline made by Grow Up, Timmy Turner! may turn this into becoming the entire household's godparents. 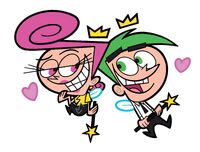 "I thought you said feather!" 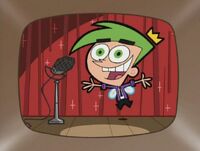 "It's a show about nothing! How do we know when it's over?" 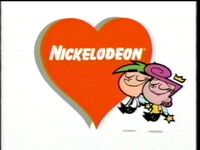 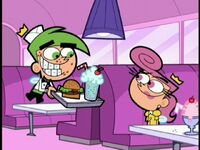 How Cosmo and Wanda met. 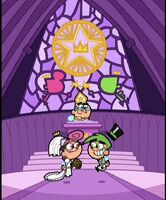 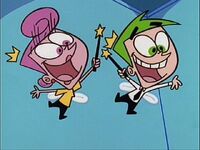 Cosmo and Wanda, as they appeared in the original Oh Yeah! Cartoons shorts. 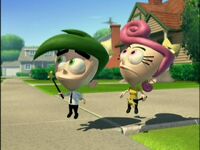 Cosmo and Wanda in Retroville, as seen in the Jimmy Timmy Power Hour trilogy. 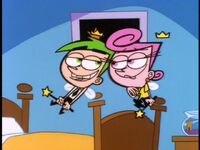 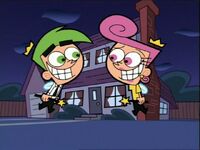 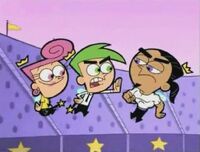 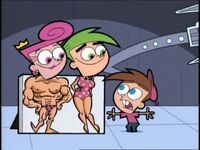 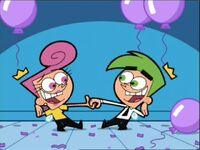 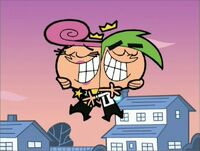 Cosmo and Wanda as they appear in A Fairly Odd Movie: Grow Up, Timmy Turner! 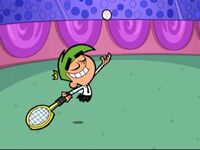 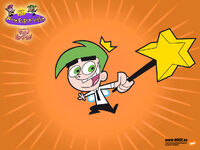 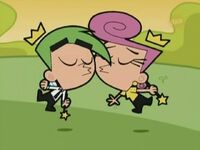 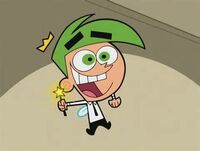 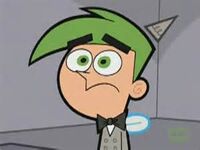 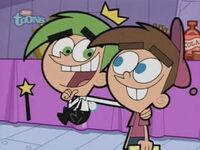 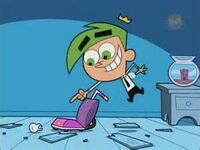 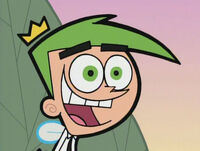 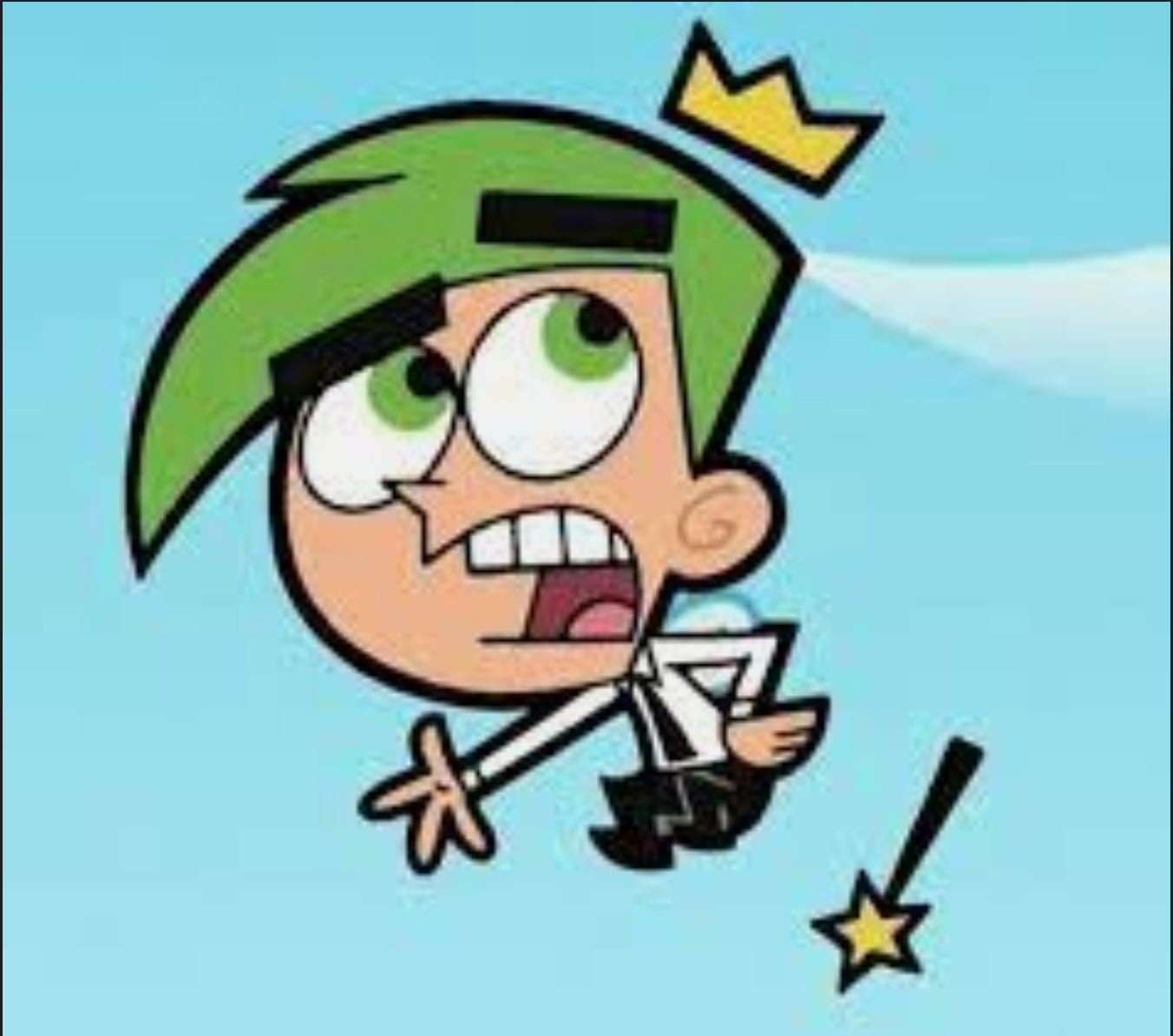 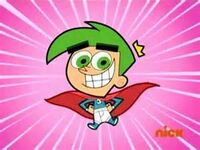 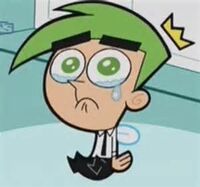 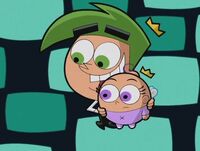 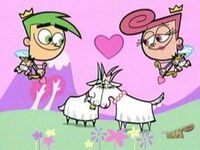 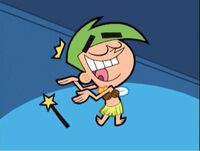 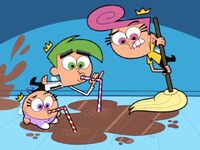 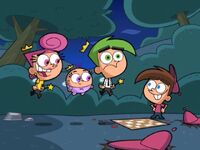 Retrieved from "https://nickelodeon.fandom.com/wiki/Cosmo?oldid=118069"
Community content is available under CC-BY-SA unless otherwise noted.