Mr. Noodman (sometimes)
Craig Slithers is one of the two titular protagonists of Sanjay and Craig. He is Sanjay's best friend/pet. Sanjay and Craig met in a pet store, but Craig is no regular pet. Sanjay and Craig are soul mates, partners in crime, and blood brothers all rolled into one. A master of disguise, Craig fools everyone into thinking he's a human, even when he's wearing nothing more than a baseball cap and T-shirt. Only Sanjay (and soon his parents) and his close friends, Megan, Hector and Belle, are aware that he can talk. His incredible squash-and-stretch abilities make him the most physically funny character, allowing him to stretch to any size as well as to eat or contain almost anything. When it comes to his daily adventures with Sanjay, Craig is the gasoline to Sanjay's fire. Craig is convinced of his own awesomeness, even to the point of self-delusion.

Craig is a green snake with dark green textures on his skin, the inside of his mouth is fully pink, and his tongue is red. In "Laugh Quake", it is revealed that Craig can move his tongue up and down like a puppet would. 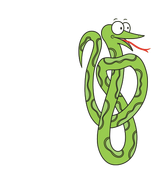