"Dimmsdale's Got Talent?" (as a balloon)

"Justice, thy name is Chin!"

The Crimson Chin is Timmy Turner's favorite superhero in The Fairly OddParents, voiced by former late night talk show host Jay Leno. He is the superhero identity of Charles Hampton Indigo, a late night talk show host who was bitten by a radioactive actor and got chin powers to defend people. The Chin takes the responsibility of protecting the city of Chincinatti, taking the secret identity of Charles Hampton Indigo for the local newspaper, The Daily Blabbity. Timmy works as his sidekick, "Cleft, the Boy Chin Wonder".

The Chin, as he is sometimes called, is Timmy's favorite superhero. The Crimson Chin has an incredibly big chin (hence his name) and a red outfit. Along with Crash Nebula, the Crimson Chin is very famous throughout Dimmsdale. The Crimson Chin comics were supposedly created by a "forty year old guy that lives with his mom" who was played in live action by Patton Oswalt.

In reference to his voice actor, the Chin was originally a struggling late-night talk show host (called Chuck Indigo), and gained his powers by being bitten on the chin by a radioactive celebrity, whose reasons of biting him are unknown; since then, he has taken the responsibility of protecting the city of Chincinnati (a spoof on Cincinnati), taking the secret identity of Charles Hampton Indigo (C.H.In, or Ch. In for "Charles Indigo") for the local newspaper the Daily Blabbity. This is a spoof of Spider-Man as Peter Parker is bitten on the hand by a radioactive spider and he works for the Daily Bugle. Also, his secret identity is a spoof of Clark Kent (Superman's alter ego) who worked as a reporter for the Daily Planet.

In some of the adventures involving the Crimson Chin, Timmy enters the comic books he is reading (thanks to Cosmo and Wanda) and takes the role of Cleft the Boy Chin Wonder (a tribute to and parody of Robin), and acts as his sidekick. Wanda and Cosmo, in turn, act as Timmy's two dog sidekicks, Ace the Chin-Hound and Clefto(a tribute to Batman's and Superman's respective super-pets, Ace the Bat-Hound and Krypto). Later Puppy Poof was added after Poof was born.

The Crimson Chin wears typical uni-colored (in this case, crimson red) spandex outfit, is extremely muscular and was turned into a comic world, and ended up running out of metaphors by the end of the episode. His body is very powerful, and his pecs are also big. He also has an 8-pack abs, powerful legs, and a bubble butt. He also seems to be supremely intelligent, taunting Short-Fuse to spill out the cage's weakness and break out of it from the outside by provoking Short-Fuse and causing the latter to explode in anger. He also doesn't mind if his powers get taken away, as he is positive about normal people and defeated the Nega Chin without it, with the help of other normal 'heroes'; Timmy and his friends.

One of the Crimson Chin's idiosyncrasies is his tendency to use odd metaphors in his inspirational speeches (e.g. "As long as there is one smoldering ember on the barbecue of justice, you can still cook a mighty steak...of VICTORY!"), which is possibly inspired by another superhero parody, The Tick (coincidentally, his costume design is also similar to The Tick) but it's the writers' fault. Crimson Chin has also been seen shouting out the names of superhero-portraying actors as a form of exclamation. Two examples being Adam West (who has guest starred on the show in several episodes) and Frank Gorshin. (West and Gorshin have both appeared on the 1966 Batman TV series together, coincidentally.)

The Crimson Chin became "alive" in the episode, "Chin Up!". After learning he was not real, the Crimson Chin lost all of his confidence and would no longer fight theTimmy entered the comic book to inspire the Chin to fight evil again. Timmy, who had become his sidekick, Cleft the Boy Chin Wonder, is nearly killed by the Bronze Kneecap's knee missile. The Chin saved him and thanked Timmy for "saving him from himself". The Chin and Timmy defeated the Bronze Kneecap.

The Crimson Chin plays a major role in the special, "The Big Superhero Wish" when a wish by Timmy Turner turns all the citizens of Dimmsdale into superheroes. The Nega Chin manages to dupe Timmy into unwishing everyone but the villains from having superpowers, stripping the Crimson Chin of them as well. Crimson Chin in his normal form, Charles Hamption Indigo, teamed up with Timmy and his friends to bring down the Nega Chin, The Babyshredder, Bull-E, and Doctor Crocktopus with the help of every day "real superheroes" like a janitor, fire fighter, and milkman. The villains are unwished into their normal forms except for the Nega Chin, who tracks down the Crimson Chin Author in real life to beat him up to try to make sure he wins, but it can be heavily implied this fails since Nega-Chin has yet to show him triumphing over the Chin and Timmy once and for all. Crimson Chin is seen again in the comic "Untold Tales From the Big Superhero Wish!", when the Nega Chin appeared in the real world. He enlists the help of his eight historic Crimson Chin forms, his original form, six subsequent past forms and future form, together they defeated the Nega Chin and the other Super Villains.

In the episode, "Lights...Camera...Adam!", the Crimson Chin is the star of a film portrayed by Adam West, who is also the hero Catman. In this episode, the director was purposely making the film bad because he was really the Bronze Kneecap.

West and the Chin met again in "Catman Meets The Crimson Chin", when Catman was introduced into the comic world, and the Crimson Chin was overshadowed by Catman. The Chin then moved away on a bus without even flying, as Timmy stated. Catman later teamed up with Crimson Chin due to his fear of dogs.

The Chin plays a somewhat supporting part in "The Masked Magician". Timmy goes into Chincinnati to get advice from the Chin on being a hero. The Chin still sees Timmy as his sidekick even though Timmy is now a full-time superhero known as the Masked Magician. The Chin warns Timmy that being a full-time superhero is dangerous because he will soon face an enemy that he unintentionally created. He gives an example with the Bronze Kneecap by grabbing him before Kneecap attacks him. It is explained that the reason why the Bronze Kneecap is the Chin's archnemesis is because the Chin accidentally tripped him during a big Jai Alai competition and won the 1st place gold trophy that Kneecap was trying to win. Furious, Kneecap vowed to end the Chin's career like he ended his. He then became the Bronze Kneecap with the intention of destroying the Chin as revenge. After Kneecap's backstory is explained, the Chin knocks him into jail.

After the birth of Poof, Crimson Chin's appearances dropped off from the show. He appeared in "Chindred Spirits", which is the last Chin-centric episode to date. In this episode, the Crimson Chin was beginning to feel glum over his lack of a love life, and his comic books were reflecting it. Timmy wishes for a girlfriend for the Chin, Golden Locks, but soon her lovey-dovey attitude ruins the comic books even more, so Timmy wishes her to turn into a villain, Hair Razor, but she nearly destroys the Chin who becomes heartbroken, so Timmy purposely puts himself in danger to turn her back to normal. It works, but after saving Timmy, Golden broke up with the Chin, but promised to remain his friend. The Chin still did not lose hope however as he still continued attempting to find a girlfriend by the end of the episode.

The Crimson Chin did not appear in Season 7 at all. He eventually returns in the television special, "Timmy's Secret Wish!", where he is one of the witnesses called to the stands at Timmy Turner's Fairy Court trial. The Crimson Chin attempts to defend Timmy, but his testimony is twisted by the prosecutor, Foop.

The Crimson Chin is a parody of Superman, among other heroes like Batman, and Spider-Man. Therefore he has several powers like: 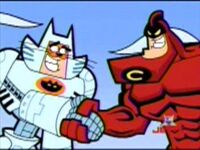 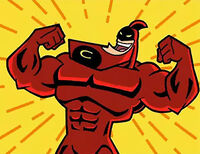 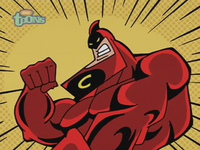 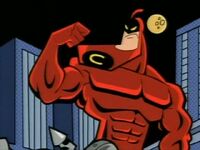 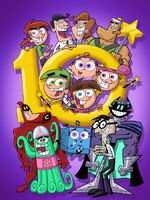 Common image of the Crimson Chin 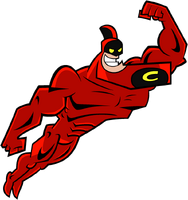 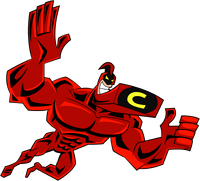 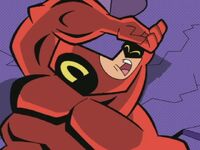 Retrieved from "https://nickelodeon.fandom.com/wiki/Crimson_Chin?oldid=261790"
Community content is available under CC-BY-SA unless otherwise noted.