Since 2008, Jacobs had substituted for Sacha Baron Cohen as the voice of King Julien. In the soundtrack of Madagascar 3: Europe's Most Wanted, he provided Julien's singing voice.

Jacobs made his voice acting debut in 1999 with an uncredited role in Full Blast. He began his role of King Julien in The Penguins of Madagascar and had reprised his role in Merry Madagascar, Madly Madagascar, and All Hail King Julien. He also impersonated Baron Cohen's character Borat Sagdiyev (as well as a cameo appearance as a Pirate with an Eye Patch) in Epic Movie. He also voiced Snake in Teenage Mutant Ninja Turtles.

In addition to the jobs that led to All Hail King Julien, Jacobs had been doing voice-over work for animated television series, including Phineas and Ferb (in which he was Ferb's singing voice and also provided additional voices), Rowdy Remington in Kick Buttowski: Suburban Daredevil, Victor Zsasz in Batman: Arkham Asylum, Special Agent Porter in Justice League: Doom, Snake / Snakeweed in Teenage Mutant Ninja Turtles, Grifter / Captain Cold in Justice League: The Flashpoint Paradox, Baron Mordo in Ultimate Spider-Man vs. The Sinister 6, and Heinrich Zemo in Avengers: Ultron Revolution, as well as several video games. He had said that animation, much like the theatre, gives actors a chance to play a wide range of roles. He said, "I can play any character of any ethnicity, any age, even any gender. And that's a freedom the camera doesn't give you. It's an incredibly freeing thing." He also stated that King Julien is his favorite voice role and would gladly reprise his role if ever asked. Jacobs had received more recognition as King Julien than the character's predecessor Baron Cohen. In Madagascar 3: Europe's Most Wanted, Jacobs provided the singing voice of King Julien for the soundtrack.

He had a voice role in Teen Titans Go! as George Washington. 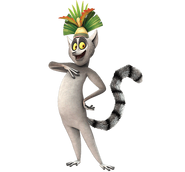