Nickelodeon
Register
Don't have an account?
Sign In
Advertisement
in: The Fairly OddParents characters, Villains, Males,
and 17 more
English

Denzel Quincy Crocker is Timmy Turner's mentally unstable schoolteacher who is the other main antagonist of The Fairly OddParents. He believes that fairy godparents are real (to the point that he spasms every time he mentions them), despite everyone ridiculing him for thinking so. In almost every episode he appears in, he is constantly attempting to capture Timmy's fairy godparents, Cosmo and Wanda, and use their magic to take over the world. When not trying to capture fairies, he is frequently grading Fs to Timmy and almost all of his other students.

Despite Vicky being considered the show's main villain (and still appearing in the show's intro sequence), Crocker seemed to usurp her role as the main antagonist in the later half of the show's run, especially during the ninth season, due to him being one of Butch Hartman's personal favorite characters. He would even appear in episodes that were not directly focused on him.

While Vicky became more evil as the show went on, Crocker became less evil and more comical during the newer seasons of the series. His intelligence has been really decreased to the point while he believes ordinary things/people are magical and is constantly oblivious to the real magic around him. He has even teamed up with Timmy in several episodes. Despite being much friendlier to Timmy (compared to the older seasons), he is still capable of evil acts.

In his youth, Crocker suffered a lot of neglect from his mother and torment from his babysitter, Vic. During this time of his life, he was cared upon by his fairy godparents, Cosmo and Wanda. But one day, they were taken away from him due to an incident involving their selves from the future. Before young Denzel could have his memory of them erased, he wrote a reminder to himself on a magic detector that they left behind, saying "Fairy Godparents!" As he grew up to become a fifth grade teacher at Dimmsdale Elementary School, he became obsessed with proving the existence of fairies to everyone, but it only drew him scorn and jokes about his sanity. One day, when one of his students, Timmy Turner, brought a baby dinosaur for show-and-tell, Crocker saw it as evidence that Timmy had fairy godparents, and he has been trying to capture them ever since. He does not know, of course, that Timmy's fairies are the same ones he had as a kid.

Crocker has a hunched back, bad teeth, black glasses, and a white long sleeve shirt with a black tie. In his youth he wore a red and white striped t-shirt and had good teeth and blue jeans. 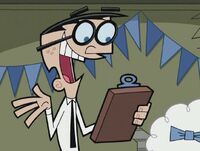 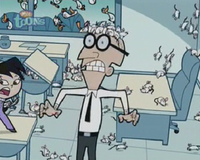 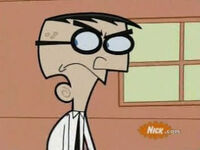 Crocker as he appears in the live-action movies. 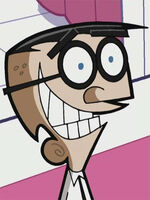 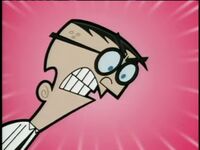 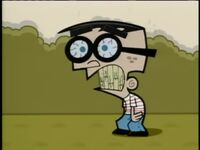 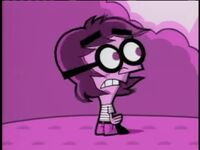 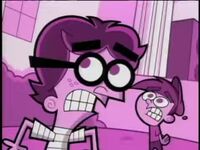 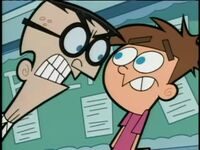 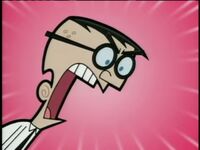