Donnie Thornberry is a young, feral boy who was raised by orangutans. Donnie can't speak any language. Often, his energy and curiosity get him and even the family into far too much trouble.

Donnie was discovered in Borneo by Nigel and Marianne Thornberry as they did a show about orangutans. His parents were killed by poachers, Donnie was raised by the gentle primates since he was a toddler. When the Thornberrys came along, his orangutan mother decided that they would be a good family for the boy. Donnie has a lot of energy and is hard to control. He is often put into the care of Debbie, who finds her little brother to be quite a handful. Donnie will eat practically anything, including bugs and plants, and enjoys speaking in his unique form of gibberish and doing "The Wedgie Dance". Discovered in the jungles of Borneo, this life form has been categorized by some as a member of the Homo sapien species. Others have classified it as: destructivus- -hyper-activus. To the Thornberrys it's just Donnie. He climbs into the mouths of pythons, bites ferocious animals' tails, and is happy to snack on a beetle or any other insect he picks up. Completely untamable, this wild boy has developed a sixth sense. He knows when something is wrong, and will use his amazing strength and skill to help save the day. 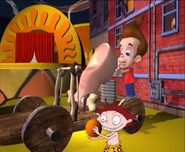 Retrieved from "https://nickelodeon.fandom.com/wiki/Donnie_Thornberry?oldid=267372"
Community content is available under CC-BY-SA unless otherwise noted.