Nickelodeon
Register
Don't have an account?
Sign In
Advertisement
in: Shows, films, and people with wikis, Movies, Dora the Explorer,
and 4 more

The topic of this page has a wiki of its own: Dora The Explorer Wiki.

Dora and the Lost City of Gold is a live-action adventure comedy film based on the Nick Jr. series Dora the Explorer. Produced by Nickelodeon Movies, Walden Media, Media Rights Capital, and released by Paramount Pictures (through its Paramount Players label), it was released in theaters on August 9, 2019 right after the show aired it's final episode.

The film focuses on an older Dora Márquez as she goes on a quest to find the lost city of Parapata with her cousin Diego Márquez.[1]

Deep in the Peruvian jungle, 6-year-old Dora Márquez, daughter of jungle explorers Cole and Elena, spends her days going on adventures with her monkey friend Boots, her 7-year-old cousin Diego, and imaginary friends Backpack and Map while thwarting Swiper the thieving fox. One day, Diego and his family leave to Los Angeles while Dora and her parents remain searching for the hidden Inca city of gold, Parapata.

After 10 years of exploring, Dora's parents decipher the location of Parapata and choose to send a now 16-year-old Dora to Diego's high school in Los Angeles while they travel to the lost city. Staying with a now 17-year-old Diego (Jeff Wahlberg) and his family, Dora meets fellow students Sammy and Randy. Due to Dora’s intelligence, the nerdy Sammy sees her as her rival. Still, Randy is amused by Dora’s intelligence and her being very nice to him and develops an immediate crush on her. Dora enjoys her new life, but Diego is embarrassed by her eccentric behavior; it culminates in mocking and name-calling by several of their peers when Dora publicly dances to a conga song at the school dance. As Diego walks outside, Dora tries to comfort him, but Diego says that she is no longer in the jungle, which leads to a fallout between them.

The following day, on a class field trip to a museum, Dora and the others are lured to its off-exhibit archives, where they are captured by mercenaries led by Powell who fly them to Peru. When they land, a man named Alejandro, who claims to be a friend of Dora's parents, helps them escape. In the process, the mercenaries, aided by Swiper, steal Dora's map.

Alejandro reports that Dora's parents have gone missing and that the mercenaries are searching for them in hopes of getting into Parapata to steal its treasures. Dora resolves to find her parents first with Alejandro's help, while Diego comes along to look after Dora, with the other teens tagging along in hopes of being rescued.

The group travels through numerous obstacles, including quicksand, Inca ruin puzzles, hallucination-inducing spores (that turned them into animated characters in the style of the original cartoon), and attacks from forest guards of Parapata. During the journey, Sammy warms up to Dora and becomes nicer to everyone. Dora and Diego eventually reconcile, and Dora notices Diego has a crush on Sammy.

After numerous hazards, Dora reaches her parents just outside the borders of Parapata, but Alejandro reveals he was the mercenaries' leader all along and captures them. The other teens are caught as well, but Boots appears and helps them escape. With Dora's parents still prisoners, Boots helps Dora to find her confidence and tells the teens that they need to find the way inside Parapata to acquire the treasure so they can use it to bargain for Elena and Cole's release.

Inside the hidden city, Dora and the others solve its temple's puzzles and dodge its traps, bringing them to the central shrine. Alejandro secretly follows them. While he thinks that the gold is the rightful answer, Dora warns him that the test could have bad answers for those who fail it and that she and her friends are safe while he stand on the trap which soon opened and falls in it. The soldiers guarding Parapata defeat the mercenaries and confront the teens. Dora speaks to their queen in Quechua, assuring that the kids only came for her parents and to learn. Kawillaka listens to Dora and wants to see the rightful path, but Swiper soon appears and steals the idol, thus angering the gods. Dora returns the idol back into place. The Incas are grateful for saving their treasures and permit them all to have a single glimpse of their greatest treasure.

After the group leaves, Diego and Sammy become a couple. Dora's parents and the teens arrive at her jungle home, where the other teens' parents are waiting and are happy to see them. Her parents discuss going on another expedition as a whole family, but Dora decides to return to school in Los Angeles.

During the credits, Dora and her friends celebrate at the school dance while singing the extended version of "We Did It", Alejandro remains a prisoner in Parapata with some guardians by his side briefly heard singing "You'll be here another thousand years!", and Cole and Elena prevent Swiper from making off with one of their items.

Tico the Squirrel, Benny the Bull, Isa the Iguana, the Fiesta Trio, and the Grumpy Old Troll appear during an animated sequence, but do not have any lines.

On October 24, 2017, a deal was struck for a live action version of the television series to be made, with James Bobin directing. Nicholas Stoller and Danielle Sanchez-Witzel were hired to pen a script. Michael Bay's Platinum Dunes was announced as producer, though Bay and the company were ultimately not involved.

The film depicts a teenage version of Dora.[2] It was issued an initial release date of August 2, 2019.[3] In May 2018, Isabela Moner was cast to play Dora.[4] Eugenio Derbez began negotiations to join in June,[5] and was confirmed to appear in July. Micke Moreno was cast to play Diego, though had to withdraw and was replaced by Jeff Wahlberg.[6][7] Eva Longoria and Michael Peña were cast as Dora's parents that August.[8][9]Madeleine Madden also joined the cast of the film.[10]In October, Q'orianka Kilcher was added to the cast,[11]and in November, Pia Miller was set to play Dora's aunt Sabrina.[12] In December 2018, Benicio del Toro joined as the voice of Swiper,[13] and in March 2019, Danny Trejo announced that he had been cast as the voice of Boots the Monkey.[14]

In an interview with Forbes, Moner stated that she learned Quechua language for the character. She said that the film would "take audiences to Machu Picchu" to "explore the Incan culture," and commented that "Dora is very cultured and she knows everything about everything," and that she "doesn't have a defined ethnicity."[15]

Dora and the Lost City of Gold grossed $60.5 million in the United States and Canada, and $60.1 million in other territories for a worldwide total of $120.6 million against a production budget of $49 million.[19]

On review aggregator website Rotten Tomatoes, the film holds an approval rating of 84% based on 148 reviews, with an average rating of 6.48/10. The site's critical consensus reads, "Led by a winning performance from Isabela Moner, Dora and the Lost City of Gold is a family-friendly adventure that retains its source material's youthful spirit."[27] Metacriticgave the film a weighted average score of 63 out of 100, based on 23 critics, indicating "generally favorable reviews." Audiences polled by CinemaScore gave the film an average grade of "A" on an A+ to F scale, while PostTrak reported that adult and children filmgoers gave it an average of 4.5 and 3.5 stars out of 5, respectively.[28]

Peter Debruge of Variety wrote, "Whereas most of the cast (and especially Derbez) play broad, borderline-slapstick versions of their characters, Moner has the wide eyes and ever-chipper attitude we associate with Dora, but adds a level of charisma the animated character couldn't convey.[28] 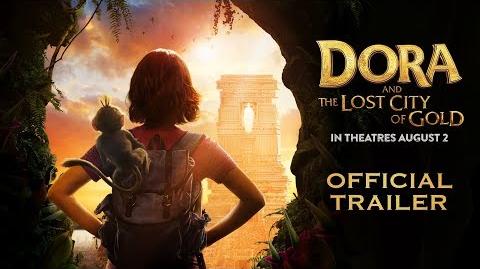 What’s in ISABELA MONER’s Backpack? I Exclusive Look from Dora and the Lost City of Gold 🎬🍿🎒
Exclusive look

11 Things You NEED To Know About Dora and the Lost City of Gold!! Nick
Extra

→ Main article: Dora and the Lost City of Gold: Music From The Motion Picture