Doug Rockwell (born September 21, 1985) is an Emmy-nominated Los Angeles based songwriter, producer and musician signed to Disney Music Publishing/Hollywood Records. There, he has written and produced the music of Marvel Rising, High School Musical: The Musical: The Series, and Zombies 2.

On Nickelodeon, he wrote and produced the music of Nicky, Ricky, Dicky & Dawn, and Blaze and the Monster Machines. He wrote and performed The Loud House theme song and he writes other songs on the show along with Michelle Lewis. 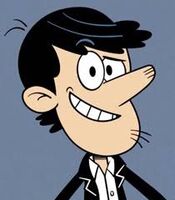 Retrieved from "https://nickelodeon.fandom.com/wiki/Doug_Rockwell?oldid=302577"
Community content is available under CC-BY-SA unless otherwise noted.