Nickelodeon
Register
Don't have an account?
Sign In
Advertisement
in: Characters, Rugrats characters, All Grown Up! characters,
and 11 more

Drew Pickles
Rugrats and All Grown Up! character

Angelica's misbehavior
Andrew Louis "Drew" Pickles is the father of Angelica Pickles on Rugrats and All Grown Up!, voiced by Michael Bell. Married to Charlotte Pickles, he works as an accountant, but unlike his workaholic wife, he still manages to get in time with his daughter, to whom he usually refers as "princess", "angel", "cupcake", "muffin", "pumpkin (pie)", etc. Though he is sometimes driven up the wall by Angelica's greedy, bratty behavior, he still loves her just the same, and sometimes is hesitant to punish her if she does something wrong. When he does punish her, however, he usually is screaming at her but doesn't hit or spank her. He is also the oldest son to Lou and Trixie Pickles, and often shares a sibling rivalry with his younger brother Stu. The brothers can often be seen fighting with each other, most notably in The Rugrats Movie, when Drew was bickering on how unrealistic Stu's toy-building career is. Almost any time a celebration or get-together is going on involving Stu Pickles and his family, Drew Pickles is usually involved, often bringing over Angelica with him. His year of birth is probably somewhere in 1957.

Drew has been a semi-regular on the Rugrats TV series since the first episode, Tommy's First Birthday. However, on All Grown Up!, Drew does not appear as often, and usually appears as a background character, redesigned a bit with slicked-back hair, a mustache and a bit of stubble on his chin.

Drew has peach skin and a pair of white eyes with black pupils, along with a large nose identical to his brother Stu's and his dad Lou's. He wears green glasses and has light brown hair. The character is normally shown wearing a light blue undershirt and a green and dark blue vest, blue jeans, and brown shoes.

In All Grown Up!, he loses some hair and grows a mustache. He now wears a yellow and brown jacket over a white shirt, khaki pants, and brown shoes.

Drew as a baby, as seen in "Sour Pickles". 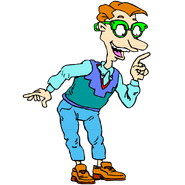 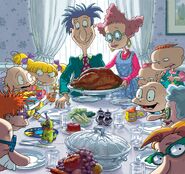 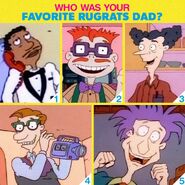 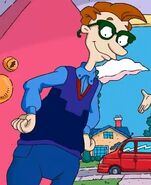 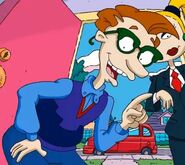 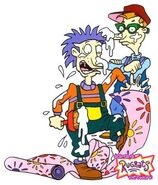 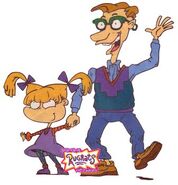