Nickelodeon
Register
Don't have an account?
Sign In
Advertisement
in: Character stubs, The Fairly OddParents characters, Males,
and 11 more

"One Flu Over the Crocker's Nest"

"Hi, I'm Elmer and this is my boil, Bob!"
Elmer is nerdy kid who is one of Timmy Turner's "back-up friends" in The Fairly OddParents. He has a huge zit on his left cheek, which he calls Bob.

As suggested, every school has its nerd and Elmer is the biggest at Dimmsdale Elementary School, rivaled only by his close friend Sanjay. He is considered an even bigger nerd than Timmy Turner, Tootie, Chester or A.J. and his biggest dream is either becoming Timmy's best friend, or replacing Timmy entirely. Bob, his boil, despises Timmy. Like the other unpopular kids, he is ignored and teased by the popular kids and tormented by the school bully Francis on a daily basis. It is implied in "Mr. Right" that he is of higher class than dweebs since when the dweeb versions of Tad and Chad landed in his seat he scoffed at them, told them not to touch him or his boil, and left for another seat.

Despite being ignored by Timmy, he still remains a close and loyal friend, and is considered one of Timmy's "back-up friends" in case Timmy's other friends ditch him or disappear. He was also named the official "backup-Timmy" to Chester and A.J., meaning he should take the place of Timmy should the real Timmy "fail to fulfill his duties".

Elmer has red hair, and wears thick round glasses and a stereotypical nerd outfit with a bow tie. He has a huge boil on his face named Bob who secretly talks to Elmer and plots to take over the world. Elmer considers the boil one of his friends. It is revealed in "It's A Wishful Life" that if Timmy did not exist then Elmer would not have a boil on his face. It is unknown how Timmy caused the boil, however. Moreover, both his parents are seen to share this afflcition, which makes this revelation all the stranger.

Elmer is introduced in the episode, "A Wish Too Far!", where much like Timmy, he is belittled by Trixie Tang on the school bus. After Timmy wishes himself into a more popular status at his school, he begins disassociate himself with Chester and A.J., forcing them to sit with Elmer on the school bus. Feeling Timmy has turned on them, Chester and A.J. give Elmer a pink hat and make him the "new Timmy" instead. After Timmy learns the error of his ways and rejects the popular kids, he notices Elmer sadly leaving, and offers Elmer the status of "back up Timmy". From this point on, Elmer is occasionally shown in Timmy's friend group, although he is still treated as second-rate.

In "The Big Superhero Wish", he became the Bouncing Boil, his "super power" was bouncing around everywhere on his boil. He was usually foiled by The Baby Shredder (Vicky) whose sharp claws easily pierced the boil and caused it to deflate like a balloon while sending Elmer flying wildly through the air.

In the episode, "No Substitute For Crazy!", Timmy entices Elmer into distracting Ms. Doombringer with the promise of making him "soar past Sanjay on the Timmy Turner friendship scale". Elmer agrees, and manages to momentarily distract Ms. Doombringer to buy Timmy some time, but the chase is cut short when his boil gets caught in a revolving door. In the episode Shelf Life, he's seen saying that writing a 500 book report is fun. To which he puts a sign saying I love books. To which Sanjay leads an angry mob to his disagreement.

Elmer is shown to sit with Timmy, A.J., Sanjay, and Chester at lunch. 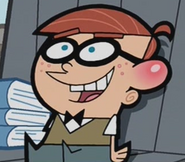