Eugene H. Krabs, usually called Mr. Krabs, is one of the ten main characters in SpongeBob SquarePants. He is the penny-pinching owner and founder of the Krusty Krab restaurant. While he can come across as incredibly selfish, he is a caring and thoughtful crab deep down. Mr. Krabs dotes on his daughter Pearl and appreciates his employees, SpongeBob and Squidward.

Mr. Krabs sometimes identifies himself as a sailor and served in the Navy at one point (earning the nickname "Armor Abs Krabs"). During his service, he was the chief janitor on the S.S. Gourmet and "head chef" on the "S.S. Diarrhea" (figure of speech, since he cleaned the bathrooms). Sometimes when he appears onscreen, sailor's music is played; Krabs uses sea-faring vocabulary; he calls disagreement mutiny and calls the bathroom the head while his laugh is akin to those of sailors. Krabs is something of a miser; he is known to go insane if he has to give up so much as a penny. He is reluctant to purchase just about anything, even though he's the richest crab in the ocean. Pearl is often extremely disappointed in Mr. Krabs' gifts to her, such as on her 16th birthday or the infamous squeaky boots.

The Krusty Krab's only competitor is the Chum Bucket restaurant across the street, run by Plankton and Karen. Plankton is Mr. Krabs' arch-rival.

After the war, Krabs stay secluded in a deep depression that seemed endless. His luck changed when he bought a local retirement home, "The Rusty Crab," which he decided to turn into a restaurant, adding a K to "Rusty" and replacing the C with a K ("Krab"). He decided to go into business selling his family's Krabby Patty burger. It was revealed to be a family secret in "Enemy In-Law." and it was King Krabs who named the burger, back in the Middle Ages. In 1959, a chum famine wiped out all of the chum crops, causing Krabs to give breaks to his employees.

In the movie, Krabs opened The Krusty Krab 2, right next to the original burger stand, where Squidward is chosen to be the manager (much to SpongeBob's dismay).

He is a descendant of the Krabs family of prehistoric times who constantly repeat the word "Money". 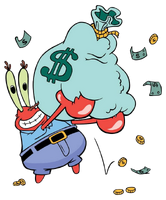 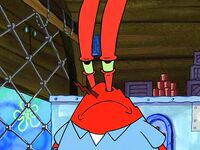 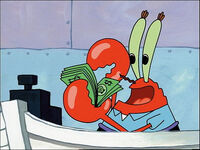 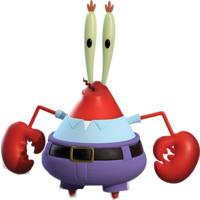 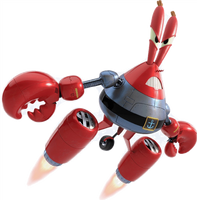 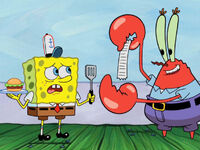 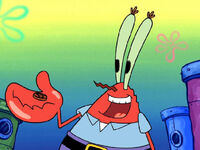 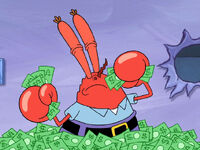 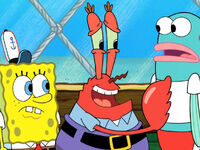 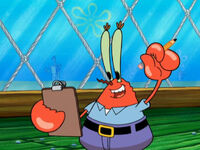 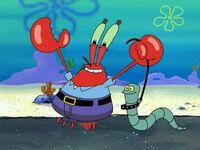 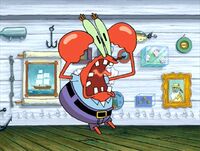 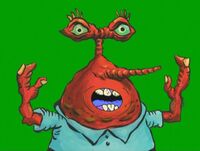 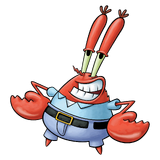 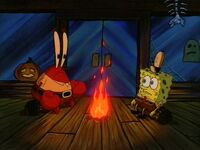 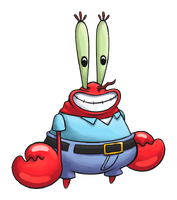 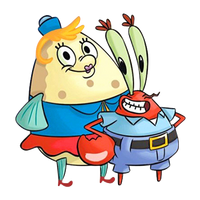 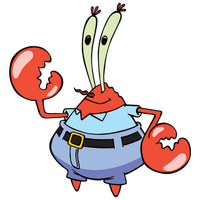 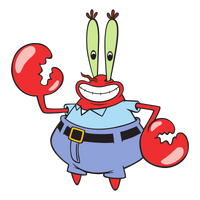 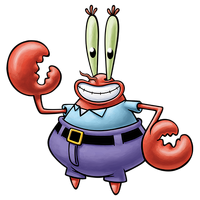 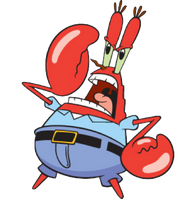 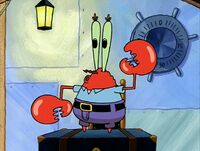 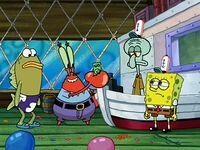 Add a photo to this gallery
Retrieved from "https://nickelodeon.fandom.com/wiki/Eugene_Krabs?oldid=266124"
Community content is available under CC-BY-SA unless otherwise noted.