Show-offs, being alone, skunk spray, not being needed for a mission ("Sea Patrol: Pups Save a Frozen Flounder"), cheating instead of learning naturally ("Pups Save a Wild Ride")

Everest is a female Siberian husky who debuted in the Season 2 episode "The New Pup". She is the PAW Patrol's snow mountain pup. Her primary purpose is to clear snow from roads or tracks during emergencies, and to use her grappling hook to get from place to place. The official website states she is the oldest pup.

Everest is a young husky pup. She has grayish-lavender fur (similar in color to Rocky's) and has white fur on her paws, chest, and belly. Her tail also is grayish-lavender, with white fur on the bottom. She has blue eyes and white ears. She also wears a knit hat that is yellow and teal in color which she is rarely seen without. Her normal outfit consists of a teal jacket with a orange trim, and white fluff.

Everest is a fun-loving Husky pup and the newest member of the PAW Patrol. She lives with Jake on his snowy mountain and loves 'belly-bogganing', sliding down on her belly. Ice or snow, she's ready to go!

Everest is an enthusiastic, kind, and helpful pup who loves performing rescues. She is very good friends with Jake, whom she is very affectionate towards. Even before she joined the PAW Patrol, she enjoyed rescuing penguins. She went out of her way to help Jake when they first met, by quickly offering him shelter in her igloo, guiding him through the storm, and digging a makeshift shelter to warm him up. She admits that she felt rather lonely without anyone to talk to. She was overjoyed to stay with him.

She is shown to be quite hyperactive and playful. She is more tomboyish than Skye, and likes snow-related activities, as well as anything to do with nature. They're still good friends despite their differences.

Like all of the PAW Patrol pups, Everest has her own personalized pup-tag. Hers is bright teal, with a shape of an Evergreen tree symbol on it, due to her status as the snow rescue pup, a place with a lot of them trees. It is used to communicate with Ryder, the Lookout, and the other PAW Patrol pups. When in use, the pup-tag flashes its light. The pup-tag also has a special mechanism, which allows the PAW Patrol pups to make video calls to other PAW Patrol members. Her Mighty Pup tag has a massive snowflake on it.

Everest's pup-pack is equipped with her teal vest. It features a grappling hook and contains a foldable rocket-powered snowboard (the latter revealed in "Pups Save a Snowboard Competition"). 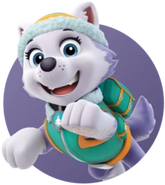 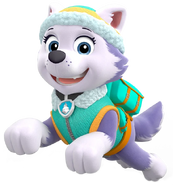 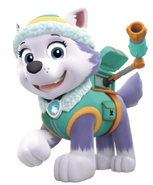 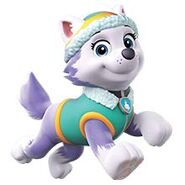 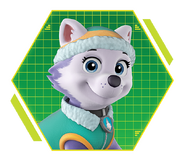