Nickelodeon
Register
Don't have an account?
Sign In
Advertisement
in: Shows, films, and people with wikis, Nicktoons, Cancelled shows,
and 6 more
English

Fanboy & Chum Chum is an American CGI animated television series produced by Frederator Studios. It is based on a first episode/short from Frederator's Random! Cartoons called "Fanboy", which was aired on August 14, 2009, the same year as the series, and it was created by Eric Robles and directed by Brian Sheesley and Jim Schumann. It premiered on November 6, 2009 on Nickelodeon after the SpongeBob SquarePants special "Truth or Square". A sneak peek of the show was shown on October 12, 2009. The series surrounds Fanboy and Chum Chum, two energetic "super fans" of science fiction and fantasy. They have super hero costumes with underwear outside the costumes and their world is full of comic adventures and misadventures.

The show continued to air in reruns on NickToons until January 23, 2017.

The animated short "Fanboy" aired as part of Frederator Studio's Random! Cartoons, and led to the creation of the animated series.

Critical reception was generally mixed while audience and fan reception was extremely negative. Aaron H. Bynum of Animation Insider called Fanboy & Chum Chum "a fun show that deserves a good look. The quality animation helps counterbalance the immense amount of dialogue from the series' chatty characters, and the sheer comedy of marginally competent comic-loving kids helps outweigh what might otherwise be a binge of geeky annoyance. But overall, Fanboy and Chum Chum is a lot of fun." Variety praised the series' "bright, energetic look and even an appealing premise in theory". David Hinckley of NY Daily News gave the series three stars out of five, and said that "it's good, but might not be the next SpongeBob".

A negative review came from KJ Dell'Antonia of Slate who found the main characters irritating, and thought the whole concept was unoriginal, with "many tired jokes and not enough of hat kind of mild satire to make this play in our house".

The series premiered on November 6, 2009, after the SpongeBob SquarePants special "Truth or Square". The broadcast ranked number three of cable programs that week and number two of the night. The premiere was watched by a total of 5.8 million viewers. The second episode was broadcast on November 7, 2009 and garnered 5.4 million viewers, ranking fifth of all cable broadcasts that week. 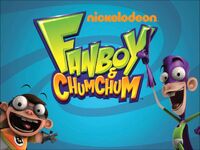 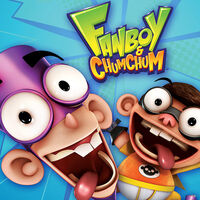 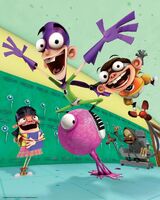 The topic of this page has a wiki of its own: Fanboy & Chum Chum Wiki.