The topic of this page has a wiki of its own: Figure It Out Wiki.

Figure It Out is an American children's game show hosted by Summer Sanders that aired on Nickelodeon for four seasons from July 7, 1997 to December 12, 1999.

Kids with special skills or unique achievements competed as contestants on the show while a panel of four Nick celebrities tried to guess the predetermined phrase that described the contestant's talent.

Shortly after the series aired its last first-run episode, Figure It Out began airing repeats on Nickelodeon Games and Sports for Kids until the network ceased at the end of 2007. The series was recorded at Nickelodeon Studios at Universal Studios in Orlando, Florida.

Each episode had two sets of three one-minute rounds, in which the panel took turns asking yes-or-no questions to try and guess the contestant's talent. Each time a panelist mentioned a word that was part of the phrase or close enough to the phrase that described the secret talent, the word was turned over on Billy the Answer Head, a purple game board head (or one of multiple animals for Season 4), (initially beige) with a moving eyeball that displayed a puzzle (the solution being the contestant's secret). It displayed up to 7 words and could also cover spaces as needed or would have one of the words of the contestant's talent revealed at the start of the game but later rules rules required the exact word to be said in order for the blank to be turned over. In later episodes, a mini version of Billy called Little Billy, which had hair and wheels would appear if the Panelists solved the puzzle before the end of the game. Panelists would then have a virtually impossible blank to fill in that involved the puzzle they solved. Little Billy also appeared when the contestant was shown what their prize was

During each round, a hint was given, either by what was called the Clue Express a set of little carts containing a clue that appear on a track in front of the panelists, the Charade Brigade or from being dropped from above. The Clue Express was replaced by the Clue Chimp for Season 4. At the end of each round, if the panelists do not figure out the contestant's talent, the contestant takes home a prize, the first usually being something from the scenery of another show like Legends of the Hidden Temple but later prizes were geared towards the show and were limited to a sweatshirt, a backpack or a message bag until Season 4, where prizes were scenes from Nickelodeon movies. . When all three rounds finish, the panelists have 1 final guess each to solve the puzzle or the contestant takes home the grand prize. Of all contestants, Lori Beth Denberg was notorious for solving the puzzle before the end of the game or when she was the only one left with a final guess.

This version was the same as the previous, except that the last two rounds last for 45 seconds. There was a new game board called The "It" Board with one of the words in certain games being dubbed "The Word of Honor", indicated by the color green. If at anytime that was said, not only that word was revealed, but the contestant got slimed.

Starting in round two and continuing through the end of the game, a special action called "The Secret Slime Action" was activated. If at anytime any panel member performed that action, those panelists got slimed, and a randomly selected audience member won a prize. Some of the actions including touching your hair, touching a clue, looking to the left (this was a reflex, as the charade brigade ran to the exit stage left), saying a certain word, or even being a panelist would cause someone to get slimed. In the Sanders era, a contraption called the "Slime Spewer" dumped the slime, in the Sutphen era, the slime either comes out from the panel desk or from another "Slime Spewer" (the holes to which the slime comes out of are shaped like plus signs and that "Slime Spewer" doubled as a clue drop), or both. There were some bogus ones as well (such as thinking about coconuts or mushroom soup). Contrary to popular belief, the action was "not" always preformed. Sometimes, the host would trick the panelists to perform the action (for example, with actions involving touching hair, host Sanders would touch hers and ask the panel "Have you done something to your hair?" then the panel would touch their hair in succession). On three shows of the original, the host, contestant or judges would make a choice as to which panelist would get slimed. 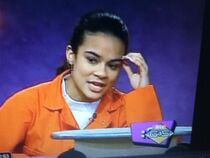 All panelists for the show were celebrities. Either three or all four panelists were taken from Nickelodeon shows airing at the time. Regulars included All That cast members Amanda Bynes, Lori Beth Denberg, and Danny Tamberelli, who also had starred in Nickelodeon's The Adventures of Pete & Pete. At one point, Cat, Dog and Cousin Skeeter were panelists. Even Coolio, who sang and appeared in the Kenan & Kel theme song was a panelist.

For more videos of Figure It Out, click here.

Retrieved from "https://nickelodeon.fandom.com/wiki/Figure_It_Out?oldid=94635"
Community content is available under CC-BY-SA unless otherwise noted.