Nicktoons: Attack of the Toybots

Jimmy Neutron, Carl Wheezer, Sheen Estevez, Jet Fusion, Goddard, Cindy Vortex, Libby Folfax, Timmy Turner, SpongeBob SquarePants, Danny Fenton
Professor Finbarr Calamitous is the main antagonist of The Adventures of Jimmy Neutron, Boy Genius. He is the father of Beautiful Gorgeous and a former student of Ms. Fowl (despite his age, though he could've been held back several times), and is Jimmy's nemesis. He may be in his 50s, 60s, or in his 70s.

Calamitous is a tiny, near-sighted, eccentric, old genius, who is one of the most brilliant evil minds on the planet, though he has a bad habit of never finishing what he starts. Calamitous is determined to get Jimmy to finish his projects for him because he can't finish them himself.

Professor Calamitous was once a brilliant little boy who never finished anything, from food to even his sentences. His inability to finish things lead him to never finishing his homework as noted by Ms. Fowl, which strengthens the idea he was held back. Later he overcomes this and is heard completing sentences after he took a self-help class (as seen in "Operation: Rescue Jet Fusion", "The Great Egg Heist", and "When Nerds Collide"). Calamitous also seems to like Ms. Fowl despite his age. He often wears a lab coat, long black gloves, and eyeglasses. Calamitous has gray hair (despite being bald).

Calamitous also has a robot bodyguard and disguise called the CalamiBot which resembles an action figure that Sheen plays with. He appears as quite an odd character.

Calamitous is also the final boss in Nicktoons Unite! and Nicktoons: Attack of the Toybots, where he faced (besides Jimmy and Timmy) Danny, SpongeBob and other heroes. He also appeared in the 2006 PC game Nicktoons Winners Cup Racing as an unlockable character. 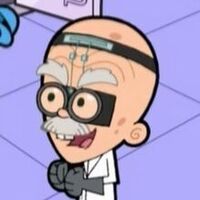